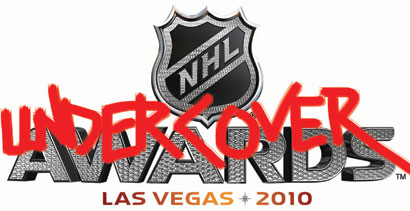 The NHL rarely showcases its dark side. The league’s website doesn’t display fights in its GameCenter highlights. Nor does it re-broadcast body checks that are potential suspensions – it does when those hits become official suspensions, as Brendan Shanahan leads the tutorial – but not when the ugly word “potential” still applies.

So, of course, the former NBA troll wouldn’t show the entirety of the NHL awards last week in Las Vegas. He killed the cameras when the real fun began.

There was John Tortorella mocking Vince Vaughn, Dominik Hasek beating Andreas Lilja with a trophy and Mike Tyson challenging two superstars to a game of floor hockey, but none of you saw it.

How did we? Well, Marian Hossa rebelled against the NHLPA and secretly videotaped the festivities. (He’s a traitor by nature, so it didn’t take much convincing. “Ten bucks,” he requested.)

Anyway, here are the awards – and moments – that gutless Bettman never shared:

The Don Cherry: Most entertaining coach

We have a theory: Kings GM Dean Lombardi employs a translator to interpret Sutter’s mumbling lectures and in-game instructions. That, or the Kings cannot understand him, and thus, play with the freedom of seventh-grade delinquents escaping a juvenile detention center.

Sutter’s incoherent sentences entertain but are not award-winning material.

Vigneault, on the other hand, is just happy to be nominated. If you’re wondering how he made this list, look no further than his assault on David Bolland. That makes for an instant nomination.

But the fact of the matter is nobody beats Tortorella, who blasted Joe Thornton, ridiculed Bettman and NBC during the Winter Classic, and nearly convinced Peter DeBoer to trade punches between the benches.

The award presentation stalls when Cherry and MacLean engage in a heated, off-the-cuff debate about “The best Sutter brother.” Vaughn grabs the microphone and summons Tortorella, who refuses to accept an award from “a sissy named Beanie in Old School.”

The harassment doesn’t stop there. Tortorella blasts Vaughn’s attendance at Rangers games and Blackhawks games (“Pick a side, ya schmuck”) and starts an expletive-filled rant that entertains the audience for 7 minutes (“Go get your ear muffs, honey.”)

Gotta love Torts. He has the potential to make our dream a reality: To see Pierre McGuire punched during a bench interview.

Presenters: Charlie Sheen and Alexei Kovalev. The ex-Pittsburgh Penguin is pelted with eggs by the pro-Philadelphia crowd as he presents the nominees for best embellisher. They believe Kovalev deliberately removed Pittsburgh’s Kris Letang from the list of nominees.

In truth Letang had no chance of cracking the top three. He faced stiff competition from the likes of Marchand, whose embellishing drew the ire of Jon Stewart and even cost the Bruins a goal in Game 6 of the first round at Washington.

Then there’s Brown, a hard-nosed, gritty player 90 percent of the time, whose flipper-like flopping the other 10 percent of the time taints his manhood. That said, neither Brown or Marchand can hold a candle to Kesler, whose somersault dive was so legendary, it translated into the best gif-maker of all-time.

Sheen hands the award to Kesler and says, “They named a Disney World resort after you, bro: It’s called The Swan.”

As Kovalev leaves the stage, he slips on egg shells, twists his knee and writhes in pain. Philly fans boo mercifully, believing it’s another prima-donna act. But Kovalev is genuinely hurt this time, unlike other instances in his career that stamped his John Hancock on the award.

The Scott Stevens: Smelling-salt hit of the year

None of the nominees show for the presentation upon learning that the tattoo-faced Tyson is presenting the award. Stevens, the most feared hitter of his legendary tenure, decides to bail the presentation as well.

Tyson is by his lonesome upon the stage, spitting insults at whomever he desires. He mocks a “sissy sport” with an award named “Lady Byng.” He threatens to “bite the ear” of Alexandre Burrows. He tosses a pair of brass knuckles to Philadelphia tough guy Zac Rinaldo, winks, then begs him to fight on stage, but Rinaldo sits still. Tyson’s rant continues for 10 minutes before a horrified, hushed audience.

Finally, he announces the winner: Niklas Kronwall for his devastating “Orange Crush” of Philadelphia’s Jakub Voracek, who, while falling back-first toward the ice, reached his hands into the air as if he was holding a phantom stick.

As you watch the video, there’s one logical explanation derived from punch-drunk Voracek grasping at nothing: He was searching for smelling salts.

Tyson challenges Sidney Crosby and Evgeni Malkin to a game of floor hockey on stage. Neither accept.

The Andreas Lilja: Numbskull play of the year

Oh, the dichotomy of Marc Andre-Fleury. He can win Game 7 of the Cup Finals (2009 vs. Detroit), or he can allow 26 goals in a six-game implosion (2012 vs. Philadelphia). He doesn’t make sense. And he certainly didn’t on Jan. 6 against the N.Y. Rangers, when he made an alert decision to play the puck … then looked like Chris Farley on skates.

When have you ever seen a forward blaze past Nicklas Lidstrom? Never?

Well, it happened in Game 4 of the first round against Nashville, causing total disarray. Ian White  ignored logic and became the third guy chasing Nashville’s Martin Erat. Sure enough, Kevin Klein scored The Easiest Goal of His Life and spelled doom for Detroit’s already-faint playoff hopes (yes, we said life, not career, because if Klein has an open net among pee wees as an elderly man in 2070, this “three blind mice goal” will still rank more simple.)

But the Red Wings’ circus is no comparison to Ilya Bryzgalov’s Universal Ugliness. His failed clearing attempt in Game 5 of the Eastern semis ricocheted off David Clarkson and ultimately marked the end of Philadelphia’s season.

Bryzgalov, however, didn’t show for the ceremony: He was too busy gazing into the galaxy through a telescope, singing “Twinkle, twinkle, little star.”

Hasek announces the award, grabs the trophy and clocks Lilja atop the head. It’s written into the bylaws of the award presentation for the 2007 gaffe.

Crosby is the lone four-time winner of this award. He’s the first player in NHL history to have an award named after him while his career is still active. That measures the power, frequency and magnitude of his whining.

But Sid the Kid missed too much time in 2011-12 to earn a record fifth title. And really, it’s not a surprise, because the last two awards do not belong to him, anyway.

No, they belonged to Burrows, whose hair-pulling incident against Duncan Keith won the award in 2010, followed by the crème de la crème: biting Patrice Bergeron’s finger in the 2011 Cup Finals.

Entering the 2012 postseason, Burrows was an odds-on favorite to spit on the Green Men in round one, kick a journalist in round two, push an elderly usher in round three and reject autograph requests from “annoying” kids in the Cup Finals.

But that’s a pipe dream now.

Blame the Los Angeles Kings, who KO’d Vancouver in a five-game embarrassment, thus ending any three-peat chances for Alexandre The Great Baby.

This year’s winner is Miller, who popped off to the media three times, according to our “pacifier counter.” Miller’s bickering was a prelude to TSN’s Top 10 NHL soundbites of 2011-12. Then, he was featured twice in the Top 10 countdown. That’s artwork at its finest.

He should send a thank-you card to Milan Lucic: Ever since he bulldozed Miller, the bickering began.

The Kevin Malone: The La-Z-Boy Award

Presenters: Kevin Malone from The Office and Sergei Fedorov.

Johan Franzen is notorious for loafing. Phil Kessel becomes irritated each time he sees a “one-way” street sign, because it mimics his style of play. Both endured long stretches without crossing their own blue line, but this award still doesn’t belong to them.

The victory was actually sealed back in November when four Columbus Blue Jackets embarrassed themselves pretending to defend Dallas forward Jamie Benn, who outworked each of them from the neutral zone, to the side boards, to the slot, to the net:

During the presentation, Kevin Malone takes his sweet ol’ time and lulls the audience to sleep. Finally, he presents the La-Z-Boy trophies: A recliner for Rick Nash, an L-shaped sofa for teammates Kris Russell, Derick Brassard and Aaron Johnson.

Nash & Co. will put the furniture to good use: It will come in handy for intense psychotherapy sessions.