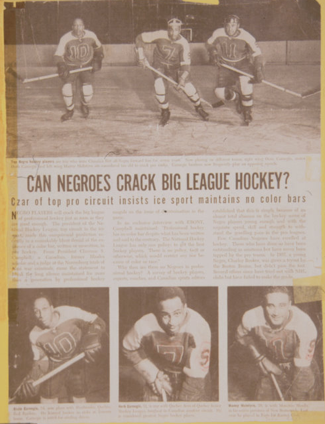 When one of the best hockey players never to appear in the NHL, Herb Carnegie, died on the morning of March 9, 2012, I had two thoughts:

1. He never lived to be inducted into the Hockey Hall of Fame.
2. Call Brian Johnson.

I’m going to use this Throwback Thursday to go way back — back to the origins of hockey itself — to explore what became of my conversation with Johnson.

Let’s begin in December 2010, when I interviewed Johnson1 for the Inland Valley Daily Bulletin. This is what I wrote at the time:

That was part of the problem.

O’Ree is widely heralded for breaking the NHL’s color barrier in 1957 with the Boston Bruins. Lesser known is the reason why he remains such a singular figure: Marson and Riley didn’t make their debuts until the 1974-75 season with the Washington Capitals. McKegney (1978), Saunders (1979), Neufeld (1980), Fuhr (1981) and James (1981) represented not the opening of the floodgates for black hockey players, but more of a slow trickle.

Compare that to Major League Baseball, where Jackie Robinson debuted in 1947, and seven other black players had joined him in the majors by the 1950 season.

The difference, Brian Johnson believes, was that the NHL wasn’t ready to open the floodgates.

“I just think they wanted to keep it as white as possible,” he said. “I hate to use that phrase, but that’s the most honest way I can say it. … The establishment, the owners – you had a lot of guys back then, their mentality was completely different to how it is today.”

Johnson is still outspoken about what he perceives as an injustice toward black hockey players on the part of the league. What, if anything, can be done to correct that injustice today?

“For one thing,” he said nearly two years ago, “they can induct Herb Carnegie into the Hall of Fame.”

Carnegie is a member of the Order of Canada, the second-highest honor of merit bestowed by his native country, and the Canadian Sports Hall of Fame. His post-hockey credentials are long. After retiring in 1953 Carnegie founded the Future Aces Hockey School, one of the first hockey schools in Canada. He became an autobiographer, a successful financial planner, and the founder of an eponymous foundation that to this day provides scholarships for youth.

Maybe that’s not enough to earn induction into hockey’s Hall, but many believe that Carnegie’s playing career should put him over the top. His statistics on hockeydb.com are eye-popping but incomplete, and offer little means for comparison. In the Quebec Senior League, however, Carnegie was skating alongside Jean Beliveau and Jacques Plante, and was coached by Punch Imlach. So there is a direct comparison to be made between Carnegie and other Hockey Hall of Famers who were allowed into the NHL.

Most of us have never seen Carnegie play, and that includes Johnson, who was born in 1960. But Johnson has spoken to some first-hand witnesses who believe that Carnegie is deserving of induction – including a former linemate, Manny McIntyre, who died in 2011 at age 92.

“First of all, Herb Carnegie was one of the best players at his time, probably even better than Jean Beliveau,” Johnson said. “There were statements being made – I can’t remember who the GM at the time in Toronto was, but (he said) ‘I wish you could turn him white and he’d be on the team right away.’ ”

I couldn’t find that quote published, but this one, excerpted from an unusually long Bleacher Report story about Carnegie, is probably what Johnson was referring to:

Hall of Fame referee Red Storey allegedly had [Conn] Smythe quoted as telling Carnegie’s coach that he would accept Carnegie on the team [the Toronto Maple Leafs] if he were white, or that he would pay $10,000 to anyone who could turn Carnegie white.

While there’s no record of Smythe publicly stating or denying this, a later remark by Storey seems to question whether or not it was indeed spoken.

“I think he said the quote, but I think he meant that with Herbie being black, he wouldn’t be able to put him in the same hotels with the rest of the team and have him eat at the same restaurants and there could be problems if he took him to the States to play against the NHL teams there.”

Playing for the Quebec Aces, Carnegie centered a line with his brother, Ossie, and McIntyre — the so-called “Coloured Line.”

“In my opinion,” Storey says in the 2001 documentary “Too Colourful for the League”, “they could have all been in the NHL as a line, with Herbie leading them.” In the same film, McIntyre recalls the Aces beating the Montreal Canadiens 4-2 in an exhibition game. Maurice Richard, Toe Blake and Elmer Lang lined up opposite the Coloured Line.

Carnegie was invited to try out for the New York Rangers in 1948. He did, and felt he had earned an NHL roster spot, but instead was told to report to the minors. He didn’t.

Some believe that Carnegie should have taken the Rangers’ last offer and done some minor league apprenticing, as Jackie Robinson had done playing a season for the Montreal Royals before the Brooklyn Dodgers called him to the major leagues. In New Haven, Carnegie would have been two hours away from Madison Square Garden.

And it might not have taken long to make the NHL, some believe. Just prior to the start of the season, a car accident injured four Rangers players, including their top centers Buddy O’Connor and Edgar Laprade. O’Conner suffered broken ribs and was out for six weeks while Laprade had a concussion (which meant little back then; he kept playing after the accident and his production declined that season from 47 to 30 points). If Carnegie had signed with the organization, he might well have been summoned to fill in for O’Connor.

“Don’t you think the Rangers would have called me back if they had been serious about wanting me?” Carnegie told Harris. But he believes they wanted nothing more to do with them after their last contract discussion. They had told him that if he signed with the Rangers and went to New Haven, he’d make international headlines. “I told them my family couldn’t eat headlines. That was probably when the Rangers decided to forget about me.”

Johnson believes he should have been at least the 10th black player in the NHL and that Carnegie, not Willie O’Ree, should have been given the distinction of breaking hockey’s color barrier.

“He was better than Willie O’Ree,” Johnson said. “Herb was a great player, a playmaker. Had vision, had everything. He just didn’t get that opportunity.”

Racism is an integral part of North American history, but the lesson here goes beyond that.

As it pertains to hockey, racism has a long history too. Here’s something I bet you didn’t know:

During the 1870s the first blacks (in Canada, specifically Halifax, Nova Scotia, where there was a sizeable black settlement) were learning to skate on lakes and ponds in ample numbers that by the mid-1880s just as in baseball the numbers of black children and young men playing hockey would have been sufficient to allow for the first organized all-Black recreational games to be played. By the early 1890s the number of quality Black hockey players would allow for the formation of an all-Black hockey league. … By 1895, (white) media in Halifax was writing about a Colored Hockey League.

That’s according to a book titled “Black Ice: The Lost History of the Colored Hockey League of the Maritimes, 1895-1925.” While plenty has been written about baseball’s Negro League, finding literature about the all-black leagues of the late 19th and early 20th centuries is a tall task. To my knowledge, “Black Ice” is the only book exclusively devoted to the topic.

In baseball circles, by comparison, the Negro League has inspired enough history and baseball romanticists to have its own Hall of Fame. There are 35 Negro League players currently in Baseball’s Hall. Interested in reading about the Negro Leagues? You’ve got options.

In hockey circles, it’s a different story, though not one without sentiment. When Carnegie sat down with CBC’s Elliotte Friedman for this interview in 2009, his exclusion from the NHL certainly struck a chord:

So why isn’t Carnegie in the Hockey Hall of Fame? Storey and Beliveau are on record in support of Carnegie’s Hall campaign. So is O’Ree, who seems like the logical torch-bearer for the present-day campaign.

“I don’t know why Herb Carnegie isn’t in the Hockey Hall of Fame,” O’Ree told me in a telephone interview from San Diego.

“It’s a great question,” Johnson said. “But you’re talking to an institution whose selection process has been compared to the Papal Conclave for its secrecy.”

True, that. We know who’s on the committee and, for whatever it’s worth, none of its members are black. We know they meet every June in a building that would blend in with the architecture in the Vatican. For Carnegie to get inducted, veteran hockey writer Stan Fischler told the New York Times, “he has to have a rabbi, a good one, with the selection committee, and no one has stepped up.”

Has Carnegie’s name even been uttered within those walls? We won’t know unless he happens to be inducted, and that hasn’t happened yet.

In the meantime we’d love to ask the Hall of Fame committee itself. But, to quote the prolific writer Rich Hammond of LAKingsInsider.com, “don’t ask for an interview for the same reason I don’t walk onto an airplane and ask the pilot if I can fly it. Everyone already knows the answer.”

1. The pretext for my interview was Johnson’s son, Chaz, who was playing in the ECHL for the Ontario Reign at the time. Chaz Johnson has an entertaining Twitter feed.