The voices say St. Louis has caught Detroit. Are they true? 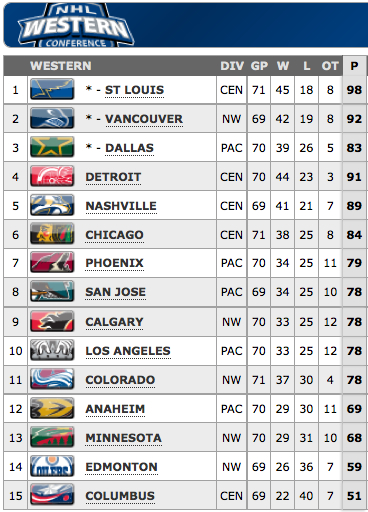 A die-hard Red Wings fan awakes in a cold sweat these days, terrorized by voices. They’re saying Detroit’s domination of St. Louis is finished, all while a rekindling of a frightening past is under way.

That’s a lie, right? How can it not be? The post-lockout era has been colored red and white. Six seasons surpassing 100 points, one Stanley Cup, damn near two, and a Niklas Kronwall-like flattening of parody.

And the Blues? How about six seasons in third place or worse, laughable prospects who never blossomed, four different coaches and one postseason berth that ended in four games.

Heck, in each of the past nine years, Detroit has experienced a longer playoff run than St. Louis. That’s right: Every year. For nine straight years. All Detroit. And it actually dates back further, to 1996, when goalie Jon Casey heard a puck clank off a crossbar, looked over his shoulder and saw Steve Yzerman doing jumping jacks on skates. Game 7 glory.

Ever since, that Jazz emblem stitched upon those St. Louis jerseys signified a franchise singing depressing blues tunes, honoring their inferiority to Detroit.

Now I hear other things, such as …

My eyes roll backward. I feel like Willie Lopez from Ghost. I’m a frantic, running-for-help mess, destined to sprint into oncoming traffic and get struck and killed by a moving car.

The voice is Jimmy Devellano, the Red Wings GM who stands before a pack of reporters during a press conference in the summer of 1989.

Devellano, who took the job in 1982, thought he just orchestrated a stellar transaction that would give Wings fans the Stanley Cup he promised “within 10 years.”

Here were were, seven seasons into his tenure, no Stanley Cup. And there was Devellano, who was oblivious to talent, age and character, completely unaware of the fact that he was about to announce The Worst Trade in Red Wings History: Adam Oates and Paul MacLean to St. Louis; Tony McKegney and Bernie Federko to Detroit.

The devastating impact still resonates today, but let’s first start with some background: The Wings were a Campbell Conference finalist across back-to-back seasons (’87, ’88), only losing to Wayne Gretzky’s juggernaut Edmonton Oilers both years.

The Wings still were a quality group in ’89 when suffering an opening-round defeat to the Chicago Blackhawks, who ran to the conference finals but lost to Calgary, the eventual Cup champs.

So, when the Wings ’89 off-season rolled around, there was Devellano, flashing that sick-twisted smile, thinking Federko — whose birth certificate said 33 but appeared to be 73 — and McKegney, would be the lynchpins to hockey’s silver chalice.

Federko played one year and retired. A short while later, his jersey was raised in the St. Louis Arena rafters.

McKegney? He was an alleged menace inside the Wings’ locker room and lasted a mere 14 games. Fourteen games. He was traded during the ’89-90 season to Quebec, the NHL’s worst franchise that won 12 of 80 games and relinquished 407 goals.

MacLean? He outscored Federko in ’89-90, which, fittingly, provided 20 tablespoons of salt in a five-inch gash.

And Oates? He teamed with Brett Hull for 10,000 goals, becoming arguably the best passing-scoring duo in NHL history, powerful enough to do whatever they chose. Heck, they could have renamed the Gateway Arch the “Hull and Oates” arch (provided the rock duo Hall and Oates didn’t object).

Anyway, Oates completely lopsided the trade. Nobody else really mattered. Not Federko’s old legs, not McKegney’s alleged character issues, not MacLean, nothing. Imagine a teeter-totter: Oates and St. Louis were the 700-pound man in the Guinness Book of World Records on one side; the Wings and Devellano were the 7-pound infant on the other. Oates slammed the deal though the Earth’s inner core and shot the Wings and Devellano skyward toward Pluto.

Oates immediately posted 100-plus point campaigns in St. Louis. His 90 assists in 1990-’91 were mostly in the direction of Hull, who scored an eye-popping 86 goals and nearly threatened Gretzky’s unbreakable record of 92 goals.

By the time he retired, Oates recorded 1,079 assists – and only 145 of those occurred in Detroit.

Stop for a minute and think about this. What if Oates played his entire career alongside Steve Yzerman and Sergei Fedorov? And on a power play with (gritting teeth) Yzerman and (banging head against cement floor) Fedorov and (pouring hemlock poison into cup) Nicklas Lidstrom?

I feel like Leonardo DiCaprio in Shutter Island, harking back to a horrid past. I’m stuck inside St. Louis Arena, watching Oates feed Hull, the goal light flickering, the crowd roaring, and that damn musical chorus of “The Saints Go Matching In” being played over and over and over …

Why am I hearing this today? Is it because Wings GM Ken Holland didn’t make a trade at the deadline to acquire Rick Nash, a piece that would surely leapfrog first-place St. Louis?

Or am I hearing this because St. Louis pulled off another steal-of-a-trade recently: Kevin Shattenkirk and Chris Stewart to St. Louis; Erik Johnson and Jay McClement to Colorado.

The Oates trade held Detroit back for years1. After watching Chris Stewart humiliate Brad Stuart in a January fight, maybe this is another trade that will come back to bite the Wings.

This was voiced by an uncle who stood on the Joe Louis Arena steps, crossed his arms on the white railing and rested in position, ready to deliver grim news. It was April of 1991. The Wings led the heavily-favored Blues in their first round series, 3-2. And here we were, in Game 6, after the first intermission, as the Blues led the contest.

For some background information, the Red Wings lost six of eight meetings against the Blues during the 1990-91 regular season. In five of those losses, the Wings yielded five goals or more2. Basically, whenever Hull and Oates came into town, you watched with a pacifier and nite lite.

Three months later, the heavily-favored Blues faced the mediocre Red Wings in the first playoff round. It was a laugher on paper: The Blues recorded 105 regular-season points, while the Wings finished with 76, four games under .500.

Yet, somehow, miraculously – in only the bizarre world of playoff hockey – the Wings held a 3-2 series lead heading into Game 6 at Joe Louis Arena. You can only imagine the build up inside an emotional Red Wings fan on this night. The Wings won both home affairs earlier in the series, causing a ripple of thundering roars across the Detroit River to Windsor. And in Game 6, they were ready to put a skate into the heart of the Blues.

Except they forgot their skates.

The first period was stale. No life. None whatsoever. When the Wings fell behind 1-0, it really felt like 100-0. We felt like a saddened Adam Sandler groaning through a song in “The Wedding Singer.”

And that’s when it happened. The uncle, maybe the Grim Reaper in a human form, possessed that assurance in his eye, full of unwavering confidence, ready to say the surest words I’ve ever heard anyone say in their lifetime:

He meant the game, but also the series.

What started as a riveting montage of Steve Yzerman highlights (Game 1 hat trick), defensemen goals (the Wings had three during a 4-3 victory in Game 4), and, oddly enough, Tim Cheveldae saves that all staked Detroit to a 3-1 series lead, had suddenly disappeared and became what we expected all along: St. Louis domination, just like those regular-season affairs. In fact, the Blues outscored the Wings 12-3 in Games 5, 6 and 7 combined.

And now I’m left with this nightmare: The Grim Reaper leaning over the Joe Louis Arena upper level railing, relaxed, with a straight look on his face. And there I stand with the “C” on my left shoulder, the words “YZERMAN” stitched on the back, full of hope, ready for the second period, ready for another magical hat trick á la Game 1, ready for The Captain to lead the comeback charge, because, dammit, he scored 51 times in the regular season, and he could light the lamp now when needed most, right?

Surely I thought Stevie Y could erase a first-intermission deficit.

And then I heard the voice.

And I still hear it and see the image of my uncle today, except it’s enunciated in super-slow motion, kind of like when Will Ferrell absorbed a dart-in-the-neck tranquilizer in “Old School.”

I’m about to faint …

‘THE RED WINGS ARE GOING TO LOSE TODAY’

Hark back to Mother’s Day in 1996, which happened to be Wings-Blues Game 5.

Detroit dominated the opening stages of the series and took a two-games-to-none lead, even winning Game 2 by an 8-3 laugher that featured five points from Stevie Y.

Then the scene shifted to St. Louis, and the series was knotted at 2-2, including a controversial Game 4, when a maintenance door inside the Kiel Center stayed mysteriously open on a muggy day, thus making the ice soft (maybe to slow down a Red Wings offense?). And sure enough, the Blues prevailed, 1-0.

Anyway, here we were on Mother’s Day: Series tied and ready for a car ride to Joe Louis Arena, still hoping this was the year the Wings would win their first Cup since 1955.

And that’s when it happened.

“The Red Wings are going to lose today,” my mother said while I left the house.

Looking back, I should’ve notified authorities. It was verbal abuse at its finest, because those words resonated with every bad play throughout Game 5.

I see Hull standing idly in front of Chris Osgood, not a Red Wing in sight. He takes a pass from Gretzky and buries it top-shelf: 1-0, Blues.

I see Sergei Fedorov chasing Wayne Gretzky through Detroit’s defensive zone. There was the Graying One, evading a Selke Trophy winner, taking a pass from Hull and lifting it over Osgood. 2-1, Blues.

I see Jon Casey robbing Darren McCarty from point-blank range atop the crease with 18 seconds left, which could’ve tied the game.

They did, 3-2. Eventually Detroit won the 1996 series, but it came at a cost of the hours between Games 5 and 6, a palm-sweaty mess that paved the way toward an adulthood filled with Post Traumatic Wings Stress Disorder.

And Game 7? Shayne Corson’s breakaway in overtime, with Vladimir Konstantinov trailing behind him, still makes my heart jump today and it’s just a replay.

Steve Yzerman’s double-overtime goal was exciting because it prevented a massive suicide plunge off The Ambassador Bridge from 20,000 Red Wings fans.

In other words, after the Game 5 defeat, we were already ruined for life. Watching Game 6 in the roaring Kiel Center and hanging onto the edge of your seat through four hours of scoreless hockey in Game 7 creates a lifelong problem.

They say parents shape your behavior. It certainly happened here.

So there it is.

Maybe the Wings will respond to adversity, just like that time Yzerman guaranteed a Game 6 victory in St. Louis, then followed it up with a blast for the ages in Game 7.

If it doesn’t happen again, and if the Central Division guard is indeed changing, then the voices will never go away.

1. The trade still resonates because Oates was traded prior to 1989-’90, a season in which Detroit failed to make the playoffs. Without the trade, the Red Wings’ playoff streak might have hit 25 years this spring, which would match the Blues’ 25-year streak from 1979-80 through 2003-’04.

2. The low point came Jan. 25, when Oates recorded four assists during a 9-4 St. Louis massacre inside Joe Louis Arena. That night included the rare milestone for Hull, who scored his 50th goal in his 49th game, which should’ve terminated Devellano’s contract in favor of a young scouting director named Ken Holland (although that eventually happened, minus the Devellano termination).