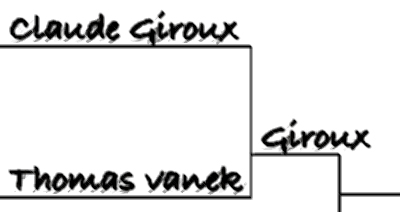 It was flat-out obnoxious.

No. 1 Claude Giroux, Philadelphia vs. No. 16 Thomas Vanek, Buffalo

Breakdown: Giroux displayed his willingness to engage in trash talking during episodes of HBO’s 24/7 series.

Ask Mike Rupp, who scored in the Winter Classic and performed a military-like salute in an effort to mock Philadelphia’s Jaromir Jagr. And there was Giroux, saying there was no need for Rupp to celebrate the “second goal of his career.”

It’s obvious Giroux (82 points) won’t hesitate to harass a lesser player such as Rupp (five points). And when the All-Puck tournament seeding was announced, Giroux gushed at the matchup against 16th-seeded Vanek, using an entire week to jot down insults.

When the game rolled around, Giroux ripped Vanek’s dog Diesel (“Why not name it gasoline?”), his status as the highest draft pick in Austrian history (“That’s not saying much, Franz Ferdinand”) and the Buffalo Sabres’ unwillingness to defend goalie Ryan Miller (“Two words: Milan Lucic”)

Vanek misses the net with every shot and loses in a 8-0 rout.

No. 8 Olli Jokinen, Calgary vs. No. 9 Jonathan Toews, Chicago

Breakdown: Playing in his first All-Puck tournament, Toews is hammered with obnoxious questions about a previous incident: In a 2011 summer camp, he barreled into a squirt hockey player, which caused the youngster to wail and cry.

The bombardment of questioning irritates Toews, who channels the frustration into positive energy and routs Jokinen 7-1.

No. 5 Loui Eriksson, Dallas vs. No. 12 Shea Weber, Nashville

Breakdown: Talk about a matchup of polar opposites. The soft-spoken Swede Eriksson, who has 17 hits this season, against the mean-spirited Canadian Weber, who has 153 hits and three decapitations.

Not helping matters for Eriksson is the location: Minneapolis, home of The American Swedish Institute, where he visited for his pre-game meal and overloaded on delicious Swedish meatballs.

Eriksson lags in the opening period and falls behind 3-1. He threatens to rally and cuts the gap to 3-2, but as he vies for the tying score, Eriksson is crushed by Weber along the glass.

Eriksson writhes in pain upon the ice as the final 44 seconds tick off the clock.

No. 4 Jason Pominville, Buffalo vs. No. 13 Dion Phaneuf, Toronto

Breakdown: The bigger and nastier Phaneuf punishes Pominville repeatedly in the opening 20 minutes en route to a 4-1 lead.

Pominville never worries, though, because in the stands is Sean Avery, who repeatedly heckles Phaneuf about his relationship with Elisha Cuthbert.

Phaneuf loses focus in the third period as Pominville rallies to tie the game with 30 seconds left, sending it to overtime.

Avery approaches Phaneuf at the intermission tunnel, and the two engage in a full-scale brawl that knocks over three cameramen and injures Phaneuf’s left quadriceps, hampering him for overtime.

Pominville needs a mere 22 seconds in the extra session to ring the game-winner off the post … and Rick Jeanneret goes wild.

No. 6 Ray Whitney, Phoenix vs. No. 11 Blake Wheeler, Winnipeg

Breakdown: Phoenix-Winnipeg matchups are bound to create ill will. So Wheeler takes it upon himself to “win one for Winnipeg” and tackles his Phoenix opponent during the opening puck toss. It’s perfectly allowed, according to Article 4, Act III, Section 9, Code 8 of the “relocation” chapter of All-Puck tourney rules. (The same applies to Dallas-Minnesota.)

Wheeler’s hit proves to be damaging for the 39-year-old Whitney, whose stiff back prevents him from competing.

Breakdown: Our background checks found O’Reilly performing a “dancer pose” in a yoga video, which is strictly prohibited by tournament competition. Thus, he’s disqualified and expelled from the All-Puck tournament.

Look. The All-Puck background checks are the best in the entertainment business. We’re not piss-poor like American Idol, who allowed Jermaine Jones to compete for two weeks and then – then – booted him from the show.

We, on the other hand, crack the whip immediately. So O’Reilly is finished before starting.

If you can talk while training, you’re not working hard enough. And if you talk about a “dancer pose” at any time in life, you’re expelled.

No. 7 Patrick Kane, Chicago vs. No. 10 Teemu Selanne, Anaheim

Breakdown: The 41-year-old Selanne, a true gentleman on and off the ice, decided to pick up the tab for Kane’s pregame meal. They get a cab to the rink, when Kane decides to pay the $9.80 fare with a $10 bill.

That’s when the cab driver says he’s “out of change” and cannot provide Kane 20 cents.

And then, for some odd reason, Kane punches the cab driver and bails the vehicle.

The governing body nearly expelled Kane from this competition. Thirteen pages of paperwork were scribbled, and then a shocking revelation unfolded: The cab driver’s name was Gary Bettman.

“Funny how it works,” Selanne said. “One minute, you’re thinking upset. The next minute, season is done.”

The trade rumors that linked Nash to Toronto, the team he says he “idolized” as a kid, gave him sky-high emotions. Not only because he could bail Columbus, but because he could play for an organization that employed boyhood role models such as Mats Sundin and Doug Gilmour.

But the trade deadline came and passed, and Nash remained stuck in Columbus, the site of this first-round matchup.

And he certainly cannot muster any energy behind a crowd of seven Columbus fans. Making matters worse, he had to eye Lupul’s Maple Leafs logo for 30 minutes and slumped through a 7-2 defeat.

Well, Downie was traded Feb. 21, and Stamkos hasn’t washed his clothes since.

The stench of Smores and Ketchup chips upon Stammer’s gear placed Brad Richards into a haze throughout the opening period.

Combine that with Stamkos’ sharp-shooting ability, and the final score was a 13-1 lopsided result.

No. 8 Zdeno Chara, Boston vs. No. 9 Max Pacioretty, Montreal

Breakdown: They meet face-to-face at the blue line, like a scene from Youngblood.

It’s odd, considering the contest begins with a puck toss into the corner, but here were Pacioretty and Chara, eye to eye.

Remember, it was Chara who rode Pacioretty’s head into the Bell Centre stanchion 12 months ago, and now, Pacioretty wanted his revenge, just like Dean Youngblood.

They raise their sticks, battling like swords until Pacioretty knocks the composite shaft out of the hands of the big, bad Chara.

Then they drop the gloves, begin to fight, and …

Well, we wish we could follow the same chain of events as the movie, which means Pacioretty would deliver a devastating, riveting KO punch to flatten Chara.

But that wasn’t the case here.

Instead the big, bad Chara pounds Pacioretty into the ground like a railroad spike and forces an injury-default to his heated rival.

No. 5 Daniel Sedin, Vancouver vs. No. 12 Corey Perry, Anaheim

Sedin’s award is the MVP voted by the players. Perry, remember, was the Hart Trophy winner, which is the official NHL MVP award distinguished by the Professional Hockey Writers’ Association.

“Your award,” Perry says to Sedin, “represents a history of losers. And Lindsey is a girl’s name.”

Sedin perfectly represents Ted Lindsey and pulls a stunt straight out of 1950: He knees Perry at the blue line, flattening him to the ice, then elbows him in the face, á la Terrible Ted.

“Corey is the girl’s name,” Sedin chuckles, as he picks up the puck and scores the lone goal in a 1-0 triumph.

No. 4 Jordan Eberle, Edmonton vs. No. 13 Johan Franzen, Detroit

They room together yet again during The All-Puck Tourney, engaging in a four-overtime battle that flirts with the opening puck toss.

Eberle, who is a big fan of the band Theory of a Deadman, is rocking to the tunes of “Hurricane” and cannot hear Hall’s questions about “what time should we leave?”

Eberle arrives late to the rink and discovers he’s disqualified, which leaves him disgusted.

“I’m a lowlife,” Eberle says, pulling on his headphones.

No. 6 Ryan Kesler, Vancouver vs. No. 11 Patrice Bergeron, Boston

In the second period, he repeatedly taunts Kesler with “Cup.”

In the third, he taunts Kesler with “champions.”

Kesler, who is usually known for his defensive prowess, is clearly agitated and off his game. He gets toe-dragged by Bergeron three times and loses 5-0.

The taunting, and yet another loss to a Boston player, all on top of an upset to a No. 11 seed, forces Kesler into hysterical tears.

Breakdown: Ribeiro is an interesting character.

With Montreal, he was criticized for diving and acting injured during a 2004 series against Boston.

With Dallas, he slashed Chris Osgood in the chest during the 2008 Western Conference finals.

It’s clear he will do whatever it takes to win – even if it’s cheap.

So you can only imagine what happened during Friday’s opening round: He performed a sneaky slew-foot on Tavares behind the net, stole the puck, checked up at the blue line, then rang an uncontested shot off the post for a 2-1 overtime victory.

A pro-Islanders crowd booed and hissed in dismay (the game was played on Long Island).

And how did Ribeiro react? He went into the locker room, then decided to stroll back onto the ice for a mocking encore, Montreal style.

Breakdown: Staal once told VERSUS that his pre-game superstition consists of the following: Take off the suit, get in the shower, put on the undergarments.

A shower before the game? That’s what he says. And if he doesn’t shower, he feels “off” his game.

Well, there aren’t any pre-game showers allowed in The All-Puck tourney. So maybe that’s Staal’s excuse for falling behind 2-0 in the opening period to the snipe-shooting Pavelski.

Or maybe it was the late night Staal had with his brother, Jordan, because this game was played in Lutsen, Minn.

No. 2 Jason Spezza, Ottawa vs. No. 15 Dany Heatley, Minnesota

Breakdown: Heatley takes the ice in front of a pro-Ottawa crowd that breaks out chants of “HEATLEY SUCKS!”

The Ottawa faithful certainly didn’t appreciate Heatley’s 2009 trade demands to leave the Canadian Capital, and they boo mercifully each time he touches the puck.

The energy clearly motivates Spezza, who scores four times in the first period en route to a 6-1 win.