The case for Don Cherry as Commissioner (or, how hockey lost its edge) 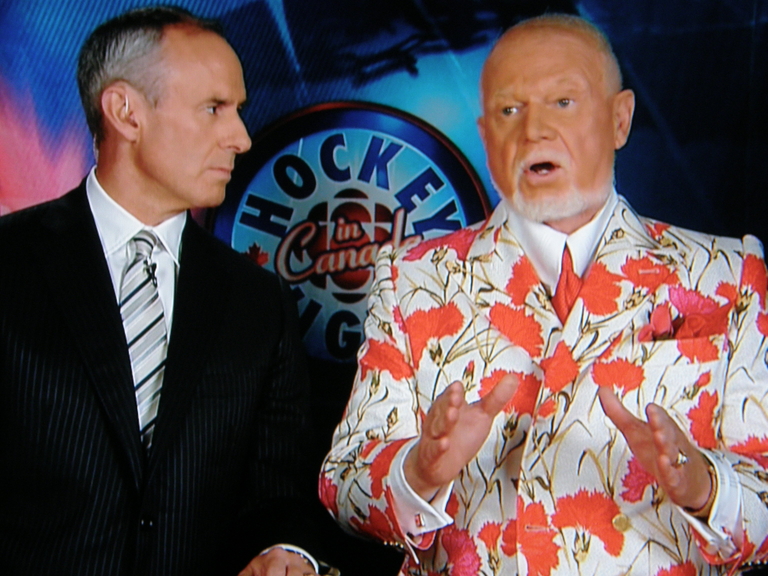 I have a dream.

Hey. Forget this “realignment” talk. The real game will return when brutality returns. Open-ice hitting? Glass-rattling hits? Sure, there’s a Niklas Kronwall KO every once in a while, but it pales in comparison to the days of Stevens, who regularly sent players into a dizzying cartoon land, birdies flying in circles.

The barbaric days of hockey are gone, and they’re never coming back. Longtime Toronto broadcaster Joe Bowen once cooed, “hockey is a contact sport, but really, it’s a collision sport.” Not anymore. Ask Max Pacioretty, who admitted he’s “afraid to hit people.” It seems like there’s a condescending hearing every three days, a ridiculous suspension every seven days. It’s sickening.

We might as well place Dave Manson, Jamie Macoun and Luke Richardson into a wax museum, that way children can cherish the legendary warriors of brutalities past1. We might as well rope off the boards in rinks such as Joe Louis Arena and label it a historic preservation site.

Look, son. This is where hockey used to be played. Ever heard of Darren McCarty? He used to tattoo poor defensemen into that corner. That corner? Yes, that corner. Bone-crushing checks. There. Right there. The glass rattled. The crowd roared. But today they call it ‘charging,’ so it rarely happens anymore.

WHAT HAPPENED TO THE PUCK CARRIER’S RESPONSIBILITY?

The NHL’s crackdown on head shots is dipping into a dangerous category: eliminating hitting altogether2. Why does Derek Joslin require a hearing after rightfully flooring Kris Versteeg on an attempted toe-drag? Why is Mark Fistric suspended three games for cleaning the clock of Nino Niederreiter? Isn’t that the same hit Kronwall delivered in May to Dany Heatley?

And why does Pacioretty receive a suspension for drilling Kris Letang? He followed an old-time hockey adage: If the opponent cuts across the middle, and isn’t paying attention, you drill him. That’s fundamental hockey. Pee Wee 101. Keep your head up. Always. Especially when cutting across the middle. (And, if you’re around Jonathan Toews.)

Shanahan3 is missing a critical aspect of these hits: The puck carrier’s responsibility. Let’s not forget about the language in Rule 48: “The referee can use his judgment to determine if the player put himself in a vulnerable position immediately prior to or simultaneous with being hit.”

Heck, Letang even he admitted he “saw” Pacioretty coming before he shot the puck. That’s admitting vulnerability. Head down across the middle of the rink? Vulnerable. Dropping the head to release a snap shot? Vulnerable. That’s why Pacioretty wasn’t penalized by two referees.

And are we forgetting about those graceful skaters who can avoid hits? Their artwork is being diminished. There’s a reason why Teemu Selanne is virtually uncheckable. His awareness is top notch. He’s 41 years old, far removed from his fleet-of-foot-skating days, yet still displays the smarts, instincts and craftiness of avoiding a teeth-jarring hit. In other words, if you get your clock cleaned, it’s your fault, Letang.

The NHL will tell you that the “crackdown” is imposed because today’s game is faster, thus making hits more lethal. I counter with this: Bobby Hull was clocked at 29.3 miles per hour in the Guinness book of world records, the fastest skater in the world for years. The game was still very, very quick during Hull’s days — and a lot of those clowns didn’t wear helmets. There were still lethal hits, and players survived just fine. So I’m not buying the argument that “today’s game is faster and we need to be more safe.” Gimme a break.

That brings us to our next point …

THE NHL IS A CONTRADICTION

If the NHL really cared about “head injuries” and “concussions/trauma,” there wouldn’t be fighting. Talk about a gigantic contradiction. (Before you post a gasoline-drenched message, let me say this: Fighting should exist. OK? Good. Now put down the lighter, matches, blow torch, whatever you were planning. Thank you.)

So, let’s get this straight: The league cracks down on body checks that involve “principal point of contact to the head.” But in a fight, the principal of contact is the head.

Confused? Good, you should be, because it makes zero sense. It’s like saying “We need to stop partying. So let’s stop taking shots of tequila and bong beers instead.”

Look, cracking down on head shots is a flawed science that will never be mastered. There are no models, just gray areas, mere guesswork subject to heated debate. Look at Sidney Crosby4, the poster boy for the head-shot crackdown. His concussion stemmed from incidental contact with Washington’s David Steckel in January’s Winter Classic, an accidental swinging arm from Steckel’s skating motion that caught Crosby’s chin. There’s no way such an incident can be removed.

When Colin Campbell left his post as chief disciplinarian, he probably felt relieved. Well, hold on. Wait. That’s an understatement. I’m guessing he felt like the psychiatrist who pawned off Bob Wiley to Dr. Leo Marvin in the 1991 flick What About Bob?

“When you rule on certain situations, all of a sudden you become public enemy No. 1,” Campbell said to TSN radio in the spring, as quoted in the New York Times. “If they want to go forward and say that type of hit or all head hits should be suspended, maybe this job will be easier, but I don’t think so.”

Shanahan, however, is no different than Campbell, who erred egregiously by not suspending Matt Cooke for a malicious blindside hit that may have ended Marc Savard’s career.

The common denominator? Bettman, who’s a walking contradiction, no clue for right versus wrong, black versus5 white. It was Bettman’s idea to construct the department of player safety in an effort to eliminate concussions. Meanwhile fighting exists (put down the gasoline and lighter), all while there’s a massive wave of concern that says absorbing hay-makers might be linked to degenerative brain disease.

If Bettman really understood safety, he would employ softer shoulder pads and elbow pads. Their rock-hard impact is a form of a weapon, really. But it only makes sense with Bettman: He’s too stubborn to admit his TV deal is a colossal joke, believes hockey belongs in non-hockey markets (Columbus, Nashville) and employs gimmick shootouts6 that affect playoff positioning.

The crackdown will continue and so will hockey’s depreciation. What was once a shiny car is now glittered in rust. The transmission is on strings (body contact is fading). The tires are balding (the instigator rule limits fighting). The brakes are squeaky (rivalries virtually non-existent). And the engine is about to die (excitement level fading).

I want Don Cherry and Scott Stevens – and I also want some sleeping pills, because it will never happen.

1If the 1980s had today’s technology – Twitter, Facebook, ESPN, massive media coverage – the NHL would’ve surpassed the NBA in popularity, without a doubt. The “niche sport” tag would’ve been knocked out with a Bob Probert uppercut.

2This is what happens when an NBA executive becomes NHL commissioner. By the way, has Gary Bettman ever walked on ice? He always uses the red carpet for presentations. I’m wondering if he’s ever walked across the ice wearing those shiny dress shoes. I bet he’d fall on his face. Think I’m silly? Hey, my favorite pregame activity in the 1980s at Joe Louis Arena was watching the off-ice officials walk like fools from the Zamboni entrance to the penalty box. Ten points for a slip. Twenty points for a double-slip. One hundred for an all-out tumble. Damn modern day rinks. They have different access points, and now, hardly anyone walks across the ice. This game is gone.
But someone should as least remove Bettman’s red carpet. Just once. Ah, shoot, remove it every time he makes an appearance!

3When recording those videos, how many takes do you think Shanahan needs? I can just see it. (TAKE 1) – “When Max Patizetty hit Kris Leta… CUT! … Patizetty? What am I doing? It’s Pacioretty. OK, let’s do it again.”
(TAKE 2) – “The principal point of contact was the head. As you can see in this video, the principal suspended me in third grade … CUT! CUT! … Damn. Unneeded flashback there. OK, let’s do it again.”
(TAKE 3) – “When Max Pacioretty hit Kris Letang, the principal point of contact … GARY, PRESS THE DAMN RECORD BUTTON!”

4Crosby was a strong advocate of the league eliminating hits to the head … and then he elbows Nick Foligno in the back of the head? It’s your world, Sid. We’re all just livin’ in it. This is why he’s despised outside Pittsburgh and Nova Scotia. Just a prima-donna whiner. Henry David Thoreau once wrote, “The masses of men lead lives of quiet desperation.” I am writing, “the masses of men lead lives of disliking Sidney Crosby.”

5Gosh darn it, I hate typing the word versus. Even if it’s used as a proposition, it reminds me of the TV network. My favorite snipe about VERSUS? The piss-poor camera angles, especially the squirrel camera running back and forth on the tight rope in each end zone. I love when they picture the wrong player after a goal or assist. More on that later.

6If shootouts ever replace continuous overtime in the postseason, do me a favor: Kill me. You have my permission. Make it quick. Make it clean. And if I have any say in this, just douse my coffee with hemlock poison.