On sticks, bubbles and the process of hockey

Not just the 60-minute game, which ticks away one second at a time.

I love the process of hockey.

The parts of the game that attacks the five senses – the unique smell of the dressing room, the unmistakable sound of sharp steel making slivers of crisp ice.

And the parts of the game that mostly go unnoticed, but are really worth paying attention to.

Little details such as the pregame skate. That’s the 16-minute occurrence that plays out while many fans in the building are still buying their beers.

Or relieving themselves of one.

The skate is about function (getting the feel of the ice and boards, for instance) and ritual (especially for the goalies, who get in one last “psych out” moment).

By the time the much ballyhooed “Thanksgiving Showdown” pitting the Detroit Red Wings and Boston Bruins had hit the NBC air (is it still called “air”?), Wings goalie Jimmy Howard had already entered his “zone.” 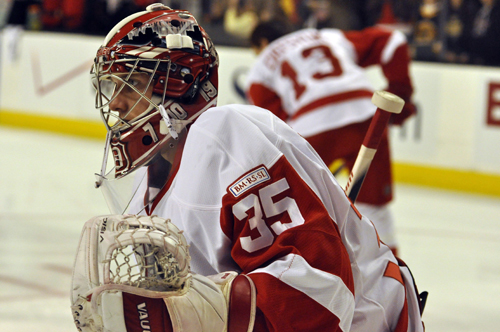 The skate is one of the last preserves of hockey individuality.

Now some of us remember an age when the game was played without helmets or masks. Look at those grainy old black and white photos. Wasn’t the Gumper a handsome guy?

And while the need for player safety trumps all, it’s too bad that it’s gotten pretty hard to tell one skater from another, whether from the cheap seats or even closer.

But during the skate, you can still see a display of men without hats.

Veterans only, though. And the Wings, who have as many geezers as anybody out there (Tomas Holmstrom really is a grey beard), charge out of the chute with eight bare heads, including a lidless Lidstrom, whose hairline is retreating deep into the corners, where there are no pucks to be dug out. 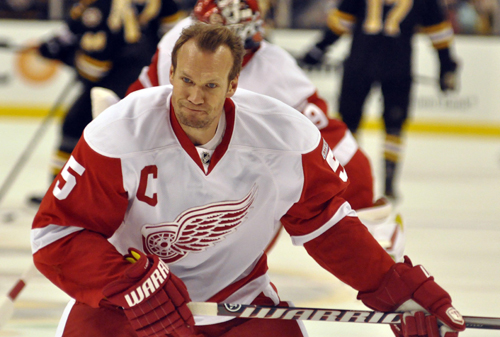 I learn so much from keeping my eyes peeled on the skate.

And not just the make up of the line combinations and d-pairs.

Who knew that Todd Bertuzzi enjoys a good, pregame chew? I didn’t. 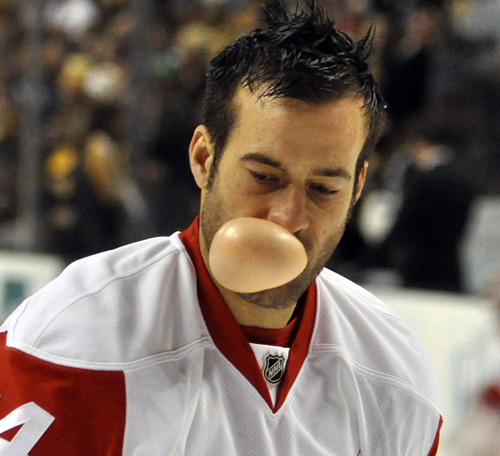 Or that Pavel Datsyuk uses the occasion to cleanse both the senses and sinuses with one blow. Never knew that, either. 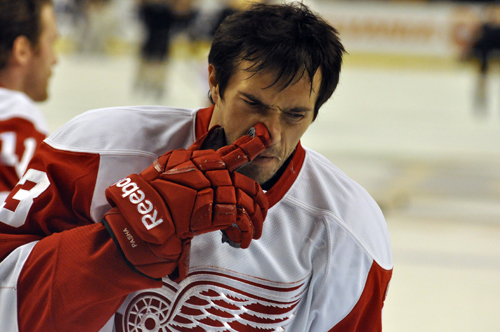 Of course the skate is just part of the bigger process. Indeed, any number of sticky details can enter the picture.

When a collision behind the net between Valtteri Filppula and Dennis Seidenberg left the Bruin rearguard’s stick wedged between the glass and the stanchion (gosh, where have we heard that word before?) … 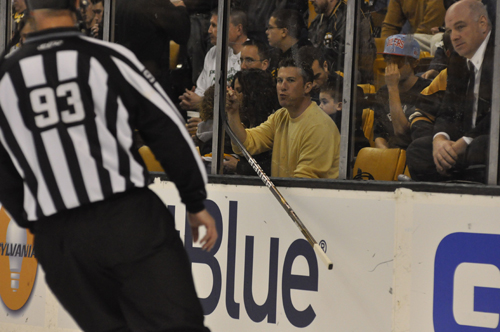 … somebody, namely linesman Brian Murphy, had to go fetch it.

The stick proved to be stubborn, as it took Murphy two yanks on it before coming free.

Oh, and the stick did get the worst of the encounter with Murphy, which fits in with some law that states “if something can go wrong …”.

As a game’s process has a beginning, it also demands an ending. Which in this case piggybacked onto the wrap up of the Bruins’ 10-game winning streak in a shootout, when Bertuzzi, who took off on a snakelike course toward the net, snapped his shot past B’s goalie Tuukka Rask. 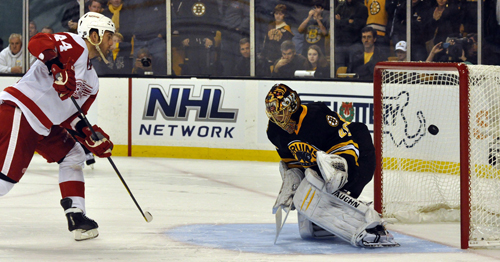 I do love the process. Every bit of it.