March Madness: The Sounds of Music 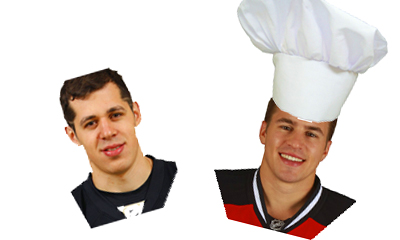 Day one of the All Puck Sweet 16 is here.

Thus far, we’ve seen a Ram truck plow Johan Franzen, an Austin Powers cart end a tournament for Alexander Ovechkin, and a net-eating slap shot from Shea Weber that scared the daylights out of Jason Pominville.

There’s been heavy trash-talk from Claude Giroux, heavy drinking from Patrick Kane, and a tournament director with heavy circles under his eyes courtesy of a fist-throwing rage delivered by Milan Lucic.

It’s been crazy. And it only gets better …

No. 1 Phil Kessel, Toronto vs. No. 12 Nicklas Lidstrom, Detroit

Breakdown: Kessel has a bone to pick with Lidstrom. Remember the 2011 All-Star game? Lidstrom was a team captain in the 18-round fantasy draft and passed Kessel repeatedly. He finally selected the Maple Leafs’ sniper – dead last, because he had no other choice.

So Kessel holds the anger and embarrassment on his mind for this Sweet 16 battle. But the negative energy engulfs the Toronto star, who has a history of clashing with coaches, and he allows it to happen again during his battle with Lidstrom.

Coach Ron Wilson instructs Kessel to “stop lolly-gagging!” defensively as Lidstrom jumps ahead 2-0. Kessel, who is already steaming as he eyes the “C” on Lidstrom’s shoulder, gives Wilson a nasty glare – and the silent treatment – as he exits the ice for the second intermission.

“He’s so focused on scoring goals, he’s forgetting the other part of the game,” Wilson says during an intermission interview. “He comes and goes into these hot streaks, cold streaks …”

It’s a cold streak during this tournament for Kessel, who has yet to score. His first-round affair against Steve Ott never transpired (Ott watched Dodge Ball in the tournament hotel, realized Alan Tudyk was his long-lost brother and missed the game as he phoned home in excitement). And in the second round, Kessel trailed Pavel Datsyuk 5-0 after two periods, but then the Martians came down to Earth and took back Datsyuk, whose disappearance granted Kessel an automatic victory.

So this really hasn’t been a productive tournament for Kessel, whose scoreless drought stretches four periods. And now, to make matters worse, he has an ongoing rift with his (now former) coach.

The ugliness comes to a head in the third period, when Kessel misplays a puck and Lidstrom scores again for a 3-0 lead. It infuriates Wilson, who leans over the bench and screams this comic line from atop his lungs: “They name streets after you, Phil: They’re called ONE WAY!”

Afterward, Kessel and Wilson take part in a back-and-forth exchange with the Toronto media. Hey, this stuff happens in a hockey-crazed market – especially when the top seed goes scoreless.

Breakdown: Doughty needs to think outside the box. Those low-scoring outputs against Taylor Hall and Marian Hossa won’t work against the offensively-gifted Kovalchuk.

Doughty, who knows Kovalchuk possesses a mean streak, believes that if he can get under the skin of the Russian superstar, it may create more offensive opportunities. So Doughty begins the game by saying “Miracle on Ice” repeatedly to Kovalchuk, and then takes it a step further and sings “Born in the USA.”

It works. Twice, Kovalchuk takes a run at Doughty, who ducks under the hit and rings a shot off the post for a 2-0 lead heading into the second intermission.

Now it’s soul-searching time for Kovalchuk, who’s yet to face adversity in this tournament. Remember, his first-round match-up never transpired: Alexander Ovechkin smashed an Austin Powers cart into a wall and injured himself. And in the second round, Kovalchuk benefited from Scott Hartnell’s pre-school maturity (Hartnell was in a foul mood because the tournament hotel didn’t supply his Kool-Aid Jammers, and therefore, slumped to a 6-0 defeat).

So here we are in the Sweet 16, as Kovalchuk searches for a dose of confidence. He thinks back to his epic battle with Markus Naslund, the time when they raced through the streets, through the alleys, through buildings, all the way back to the rink, where Kovalchuk beat Naslund to the puck and rang a shot off the crossbar.

Down 2-0 in the Sweet 16? That’s nothing. If he can defy the odds against Naslund, then he can surely do it again against Doughty.

Kovalchuk scores five times in the third period – all while ignoring Doughty’s impersonations of Bruce Springsteen – and advances into the Elite Eight with a 5-2 triumph.

No. 1 Evgeni Malkin, Pittsburgh vs. No. 5 Zach Parise, New Jersey

Breakdown: Malkin benefited from Jiri Hudler’s cowardliness and Patrick Sharp’s dullness to reach this point. But Malkin has his hands full with Parise, as they battle through a scoreless regulation.

In overtime, Malkin rips Parise about the time he had to wear a chef hat, and says, “You put the ‘boy’ in Chef Boyardee.”

Clearly frustrated, Parise delivers a devastating check along the glass that knocks Malkin to the ice.

“Sucker,” Parise says with a laugh, as he coasts to the blue line, all while thinking he has a clear path to the net.

But here comes Malkin, unfazed by the big hit. He steals the puck, checks up, then scores the game-winning goal for a 1-0 triumph.

“Get back in the kitchen, Zachary,” Malkin says.

Breakdown: St. Louis faces a daunting task inside Joe Louis Arena against Zetterberg, who has the home-ice advantage and a slew of Red Wings jerseys in the stands supporting him.

Immediately, St. Louis falls into a 1-0 hole: He chased after a loose puck, ran into a referee, slid on his back, and thus gave Zetterberg a clear path to the net.

It’s not a good way to begin for St. Louis, but he’s conquered adversity numerous times throughout his career. He believes it will happen again when he hears his favorite song, “Don’t Stop Believin'” on the Coliseum speakers.

But his good feelings don’t last long. In fact, they dissipate in the matter of seconds, as the pro-Detroit crowd screams the verse of “SOUTH DETROIIIIIIIIIIIIIT!”

St. Louis drops his stick in disbelief. The classic hit by Journey propelled him to victory in the previous round when he staged a comeback against Jamie Benn. But the song is not a motivational advantage in the territory of Zetterberg, who takes advantage of St. Louis’ bewildered state and scores for a 3-2 lead heading into the second intermission.

As St. Louis heads onto the ice for the third period, he looks upward and sees good buddy Vincent Lecavalier in the Coliseum control room. Last round, Lecavalier acted like a Roman emperor and gave St. Louis a thumbs up en route to victory.

Zetterberg scores three times in the third and wins 6-2.