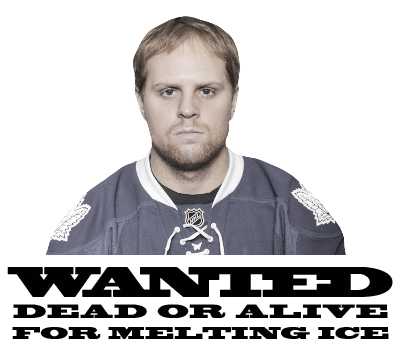 Day two of the Sweet 16 was delayed for several hours when Phil Kessel pulled the generator plug and melted the ice at our Phoenix facility. We know he’s still steaming from his back-and-forth argument with Ron Wilson, and that embarrassing loss to Nicklas Lidstrom – and that scoreless tournament as a top seed – but this is just absurd.

Unfortunately, local authorities could not find Kessel, whose elusiveness and running skills outweigh his defensive abilities on the ice.

Here’s to thinking he’ll be a thorn in our side as the tournament progresses. And we should be able to handle it, as long as he’s not throwing punches á la Milan Lucic.

Without further delay (looking over shoulders and eying generators), the Sweet 16 continues …

No. 1 Claude Giroux, Philadelphia vs. No. 12 Shea Weber, Nashville

Giroux’s trash-talking antics through two rounds garner consideration for the All-Puck Tournament Hall of Fame. The image of Thomas Vanek slumping to one knee, the red light flickering behind him, the scoreboard reading 8-0, and Giroux saying, “Franz Ferdinand” is a highlight reel for the ages.

Trash talk is a fuel tank for Giroux’s success. Nobody is better. He’s like Dick Vitale, plus Snooki, plus 25 Red Bulls, all wrapped into one skater. He’ll drive you nuts.

But now he’s biting his tongue, and we don’t blame him.

Would you talk smack to Shea Weber, a 6-foot-4, 234-pound beast who crushed Loui Eriksson in round one? Is it smart to irritate the Nashville defenseman, who scared Jason Pominville into disqualification, and, even worse, (actually) punched Andreas Lilja into a 12-month hibernation?

It’s obvious Giroux needs his trash-talking mojo, but what should he say? What can he say without getting plastered by Weber?

Well, to take down a bully, sometimes you gotta kill ’em with your kindness.

“You know … (gulp) … I really … admire your game,” Giroux says to the Nashville hulk at the start of the third period.

“You have an Olympic Gold medal, you’ve been a top-four defenseman in Norris Trophy voting the past two years, soon to be three years …”

“Heck, you’re my vote to win the damn Norris Trophy this year …”

“Pat yourself on the back. You’re gonna beat that legend Nick Lidstrom. Think about that: Nicklas Lidstrom.”

Weber stands still as the third period begins. He’s frozen in kindness and cannot possibly compete with less than 100 percent rage. In fact, his rage meter is minus-5 percent, a calmness that causes him to stand idle for the entire 10-minute period. Meanwhile, Giroux continually rings pucks off the post, all while circling back to Weber at the blue line (“That goal you scored against Germany? Unbelievable”), then back toward the net to score (ping!), then back to Weber (“Sidney Crosby scored the game winner, Jonathan Toews was the ‘Best Forward’, but we all know Shea friggin’ Weber solidified Team Canada”).

No. 3 James Neal, Pittsburgh vs. No. 7 Patrick Kane, Chicago

It’s the battle of The Glamour Boys.

There’s Neal, who has an obsession with hair gel and mirrors, as he proudly displayed during an episode of “NHL 36.” And there’s Kane, who will find any location where there’s cameras, alcohol and cute coeds.

Put them together and you’ll find a hockey game without helmets, that way their boyish looks are on display for groupies who plant their bodies and lipstick against the Plexiglas.

In fact, this game was delayed 90 minutes because Kane and Neal took pictures with a host of chicks in their respective player entrances. Finally, the All-Puck Tournament Director walked over and scared everyone away with his black eyes, and now, it’s time for the opening puck toss.

And the pretty-boy show.

Kane takes “flash” to a whole ‘nother level in the opening period and plays without his right glove – that way chicks could see his shiny Stanley Cup ring. And of course, since he’s Patrick Kane, his shooting doesn’t miss a beat as he jumps ahead 3-0, all while his curly-blonde hair flaps in the wind, not a strand out of place.

This really irritates Neal, who told “NHL 36” that he washes his hair “once a week” to preserve his looks. And to make matters worse, he’s being humiliated by a player with better-looking hair, all while 10,000 females giggle and snicker in the stands.

Neal is at his wits’ end. It’s bad enough he’s called the “little brother” by his Penguins teammates, but now he’s losing to Kane, who really does look like your little brother.

That’s it, says Neal. It’s time to take a stand during the second intermission.

NEAL: “No! Remember when my Plymouth Whalers beat your London Knights in the OHL playoffs?”

KANE: (Points ring finger toward scoreboard) “What’s that have to do with today?”

KANE: (Running hand through hair) “You got nuttin’ on me, gel boy. Now go get your Hawaiian shirt.”

You can only guess what happens next: Kane scores four times in the opening minute of the third period to shatter the tournament record (which, of course, he set in the previous round despite a two-day bender.)

Kane rolls into the Elite Eight with a 7-0 win, then holds an impromptu seven-hour photo session with all 10,000 women in the stands.

Neal, meanwhile, slumps into the locker room and stares endlessly into a mirror …

No. 1 Steven Stamkos, Tampa Bay vs. No. 5 Daniel Sedin, Vancouver

It’s bizarre for Daniel Sedin to participate in a tournament without his identical twin, Henrik Sedin. They’ve been hotel roommates since being selected second and third overall in the 1999 draft. In this tournament they were roomies in the opening round, but once Henrik was eliminated, All-Puck rules specified they could no longer share a room.

Now, look: Daniel survived his second-round battle, but that’s only because Johan Franzen lost his battle to a Ram truck.

So today is officially the first game day that Daniel is without Henrik – and it’s an odd, odd feeling.

Anyway, Daniel is out of his rhythm. He typically awakens in the morning when Henrik taps the hotel snooze bar repeatedly, every 10 minutes, for two hours. Yes, two hours.

The snooze bar is annoying for Daniel, yes. But without Henrik’s awakening routine, Daniel sleeps too long and misses warm-ups.

That’s never good against the gifted Stamkos, who jumps ahead 3-0 in the opening period en route to a 5-1 victory.

The site of this Sweet 16 matchup is not favorable for Bergeron. He’s timid as he takes the All-Puck tournament shuttle to Jobing.com Arena. It’s where his feature aired for NHL 36.

Finally, Bergeron saw his equipment hanging in a stall, all of that worrying for nothing.

But worrying can have a lingering effect and create post-traumatic symptoms, which is the case for the self-conscious, bipolar Bergeron, who falls behind 2-0 to Pavelski in the opening period.

But we know the silly symptoms of those bipolar patients: One minute they’re down, the next minute they’re sky high. Sometimes it takes one thought to get ’em going. It’s like a light switch. Flick. It’s on. And there’s nothing stopping them.

So here comes Bergeron’s light-switch moment: He thinks back to Game 7 of the 2011 Stanley Cup Finals. There he was, shaggy beard and all, shooting a puck to beat Vancouver goalie Roberto Luongo for the crucial first goal of the game. There he was again, scoring on Luongo to put the game out of reach and the champagne on ice.

“Two goals down? Bergeron says. “Ha! This is mine, Pavelski.”

Bergeron opens the second period with two goals in 47 seconds – just shy of a tournament record. He proceeds to score four more in the third period en route to victory.

Afterward, things get crazy: Bergeron hops in the shower, returns to his locker stall and … his equipment is missing.

He runs into the hallway with towels draped over his shoulders and waist, and he sees a stocky figure lugging down the hallway, struggling to carry a heavy bag of equipment.

Bergeron turns around to look at his coach.