History and another lockout aren’t on the Kings’ side. They’ll win the Cup anyway. 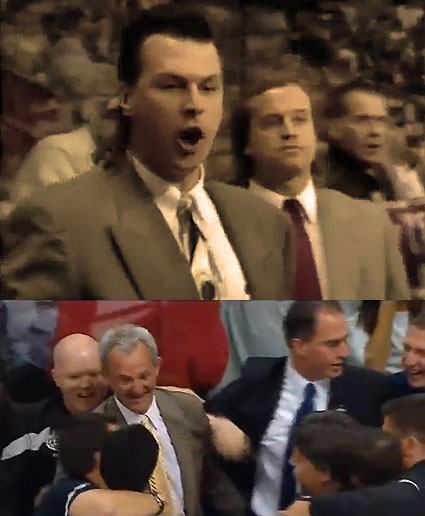 Hockey fans have been talking a lot about last June here in Los Angeles. I’ve also heard whispers about the lockout-shortened 1995 NHL season.

You can guess why last June is special to hockey fans in Los Angeles. Here’s a brief history lesson from ’94-95.

The Stanley Cup playoff brackets were decided on the final day of the regular season. The final piece of the puzzle was the Kings, who needed to win their final two games to leapfrog two teams to clinch a Western Conference playoff berth. As it often happened that year, the two games were scheduled 24 hours and 865 miles apart.

On May 2, playing their 47th game of the season, the Kings invaded Winnipeg and beat the Jets 2-1. Rob Blake and Jari Kurri scored for L.A., Randy Gilhen scored for the Jets, and Kelly Hrudey made 42 saves. One down, one to go. Barry Melrose’s bunch rolled into Chicago the next day to face a Blackhawks club that had won four straight. This one was no contest – the ‘Hawks rolled to a 5-1 win. Eddie Belfour denied Wayne Gretzky for five of his 21 saves. The losing coach, Melrose, wouldn’t coach another game for 13 years and buried himself behind a desk in Bristol, Conn.

The winning coach, Darryl Sutter, tucked a sheet of paper into his suit pocket, stepped down from the bench and headed down the tunnel to the home clubhouse without cracking a smile.

I may have made that last sentence up, but it’s not hard to imagine.

Flash forward to this year.

No one is mistaking this grand 48-game experiment for a good idea. But plenty of good, never-before-seen ideas could have been born between the time the first day of training camp was cancelled and Saturday, when the Memorandum of Understanding was signed to end the lockout. My favorite idea that was kicked around: A 20-team postseason, just for this year. Knowing nothing about what that would have meant for arenas, travel, or — most importantly — the business of the game, I was a fan of an expanded postseason.

The 1995 Kings were a good team, two years removed from a Finals appearance, but they happened to get off to a bad start after the lockout. They were 5-11-4 on March 6 and 11-12-5 afterward. Who knows how the final 34 games of a “regular” regular season would have treated them – after 20 games in 1995, they were sunk. Nothing else threatens the integrity of the playoffs, or begs a massive asterisk, like turning an 82-game marathon into a 48-game sprint. It changes the process of eliminating teams during the “regular” season  That ’94-95 Los Angeles team was proof.

Why not correct for any possible omissions by letting four more teams into the playoffs?

The concept works like this: The first six teams in each conference automatically qualify for the playoffs. The teams that finish seventh through 10th in the conference meet in a one-game playoff, televised doubleheaders guaranteed to resonate. Team No. 7 plays host to No. 10. No. 8 entertains No. 9. The winners advance. The two sweetest words in hockey are Game Seven. Now even before the beginning of the most delightful part of the hockey calendar, and the most anticipated playoff round, the NHL could giftwrap four elimination games.

The least Gary Bettman owes hockey fans is a gift.

There’s a mild irony to my Stanley Cup pick.

The Kings are not the best bet to repeat as champions simply because they dominated the 2012 postseason. Not because wiping out the first three months of the season is the piping-hot menudo for a bout with Stanley Cup hangover. Not because the Kings have the only NHL head coach who’s been through a lockout-shortened season before in Sutter. Not because they have their entire roster back1 – a boast no previous champion can claim — while new players on other teams struggle through a potential learning curve.

And not just because many of those teams will eliminate themselves by playing poorly through the first quarter of the season.

It’s the sum total of all these factors.

Pierre McGuire told TSN Radio Montreal that success in a 48-game season boils down to five things: “One, really good goaltending. Two, a four-line attack. Three, make sure you understand work-to-rest ratio as a coach and you don’t break the guys down. That’s important for maintaining the team’s collective health and avoiding injury. Four, you can’t have a prolonged losing streak of five games or more or you’re in trouble. Remember you’re playing conference games and division games exclusively so they’re all four-point games. Five, you have to have a creative coach.”

Is there a chink in the Kings’ armor among those five requirements? Creativity is not seen as Sutter’s strongsuit, but it’s all relative. Sutter wouldn’t have 12 NHL seasons on his coaching resume if he hadn’t found the correct balance between conservative and risky. (And does anyone know if giving Miikka Kiprusoff 92 percent of the Calgary Flames’ starts over four straight years is conservative or risky?)

In 1995, the Detroit Red Wings were the overwhelming favorites to beat the New Jersey Devils in the Finals. The Red Wings had run roughshod through the regular season. The Devils had an inexperienced goaltender in Martin Brodeur and an unpopular if not effective system, the neutral-zone trap. That New Jersey swept Detroit in four games seemed like a fluke at the time, but in fact provided a template for postseason success that lasted 10 years. (In other words, until the next lockout.)

There won’t be a lockout for another eight years at least. In 2021, we’ll be talking about the Kings’ back-to-back championships and the mindless lockout sandwiched in between.

1. This is essentially true even after Los Angeles traded Kevin Westgarth to the Carolina Hurricanes for Anthony Stewart and two draft picks over the weekend. Westgarth, the Kings’ enforcer, didn’t appear in a single playoff game.