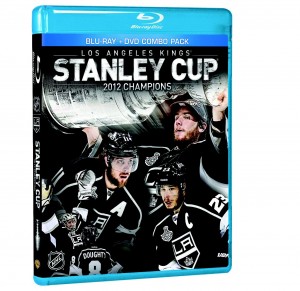 Eight minutes to sum up the first 43 years of the Los Angeles Kings’ existence and it doesn’t seem like they missed much.

Maybe most Kings fans have edited all the swarthy swaths of losing hockey from their memory banks. Maybe not (which seems like a tough existence). Just imagine what was left on the chopping block — six straight seasons without a playoff berth in the 2000s come to mind — and watching a collection of highlights and interviews from the 2011-12 season becomes cathartic, down to every tiny detail.

Actually, “Stanley Cup Champions 2012: Los Angeles Kings” glosses over many details, as it must to compress an entire season into the film’s final 72 minutes. As the title suggests, this is a just-the-facts-ma’am, game-by-game account of the team’s playoff run. The story is told with a little more color than the Kings’ uniforms, but the format is very straightforward — to be expected from a documentary released less than two months after Los Angeles closed out the New Jersey Devils in the six-game Final.

Expect a lot of game clips, interspersed with cutaway interviews of players, coaches, journalists and the occasional front-office executive. Two notable exceptions: Anschutz Entertainment Group CEO Tim Leiweke and Kings general manager Dean Lombardi, who were either unable or unwilling to be interviewed for the documentary.

If you liked the way HBO’s “24/7: Road to the Winter Classic” handled game footage, you’ll be happy to know that “Stanley Cup Champions” is visually on par (while cutting out all the players’ profanity). That said, there’s none of the all-access-style footage that simultaneously humanized and dramatized “24/7.” Pregame soccer scrimmages among players and occasional locker-room clips are about as behind-the-scenes as it gets.

That is, until you check in on the “Extended Interviews and Personal Stories” in the bonus features section. The highlights:

• Actor Matthew Perry explains why he’s responsible for the playoff runs in 1993 and 2012.

• “Wheel of Fortune” host Pat Sajak gets giddy, too: “I should have outgrown this by now, but I’m just as excited as a kid,” he says. “I’m all a-twitter with this thing.”

Every now and then, a player reveals something new, too. Apparently Justin Williams gave one whopper of a pre-game speech before Game 6 to rally the troops. Alec Martinez didn’t get any sleep in the afternoon before Game 4. Jonathan Quick, the perpetually poker-faced puck-stopper, all of a sudden can’t stop smiling.

Toward the end of “Stanley Cup Champions,” Williams is quoted as saying “we probably aren’t going to be all together next year.” Whoops. Last week, the Kings locked up forward Dwight King, the last remaining free agent from their championship roster.

That merely reinforces what we already knew: This film is a Polaroid of a moment in time, one that hasn’t been seen in these parts in 45 years, one that might need to be watched over and over again.