Debating the meaning of ‘dynasty’ in today’s NHL: Do the Blackhawks measure up? 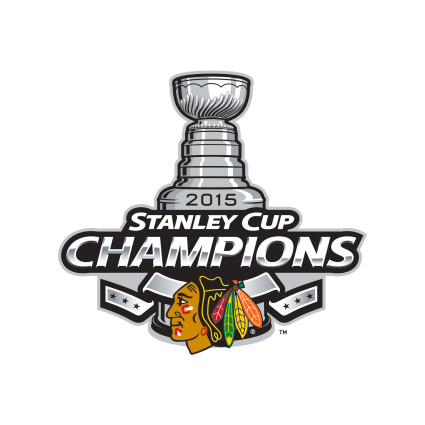 My inner cynic and my inner romantic were going after each other pretty good tonight after the Chicago Blackhawks won the Stanley Cup.

NHL Commissioner Gary Bettman humorously declared “you have a dynasty” tonight, and my inner cynic practically choked on its sarcasm-flavored Kool-Aid.

Thanks, Mr. Commissioner. Where can I pick up the keys to my dynasty?

Oh, God. Really? Is this the sort of dynasty I should have a doctor look at?

Does this dynasty come with french fries? I’d like to super-size it.

Here’s the thing: It was Bettman who fought to institute a salary cap in 2004. It was a salary cap that forced the Blackhawks to jettison some of their best players (Dustin Byfuglien, Andrew Ladd, Kris Versteeg and ultimately Antti Niemi) after winning the first Cup of their alleged dynasty back in 2010. You want a real dynasty? Show me a Chicago Blackhawks team that didn’t have to eject half of its young core, then pin its hopes on a group of six players, then hope it guessed the right six, then hope those six stayed healthy, then hope the salary cap remained stable enough that it didn’t have to trade any of the six over the next half-decade.

If I’m Chicago, the first thought that comes to mind is “Thanks, Mr. Commissioner. Your verbal assurance that we have a dynasty totally makes up for five years of sitting on salary cap-induced pins and needles.”

At least, that’s what my inner cynic was thinking.

Really, if I’m Chicago, I’m not putting labels on this thing, whatever this thing is. I’m the one city that ended the season happy, the one team that just reached its ultimate goal. Who cares if this is a dynasty? While 29 other teams lick their wounds and second guess their every move, I’ll just lift this shiny piece of hardware over my head.

At least, that’s what my inner romantic was thinking.

Taking a step back, maybe there was (gulp) real value in Bettman’s platitudes. Here’s the real question to ponder: Could it be that three titles in six years is what a dynasty looks like in the NHL in 2015?

Dean Lombardi, the general manager of the Los Angeles Kings — the one team that can claim an overlapping dynasty if it wins the Cup next year, at least by Bettman’s definition — often speaks of operating within a “salary cap world.” As a hockey executive, it’s the only world he knows. The cap sets the rules for how to build a team. Not the free market, though that plays a role; not his team’s needs, though that plays a role too. The cap is the Matrix, and there is no red pill by which to escape.

Bettman knows this. He is essentially The Architect of the Matrix. Maybe he knew that Byfuglien, Ladd, Versteeg and Niemi (or some combination close to it) were soon to leave Chicago in 2010, and that Johnny Oduya and Antoine Vermette will find the exit door soon enough this summer. Brent Seabrook and Kris Versteeg (again) are both unrestricted free agents again after next season. The 2014-15 Chicago Blackhawks are a team pressed against the cap (again), forced to get creative financially (again) to maintain this thing, whatever this thing is.

Well, the Architect just called it a dynasty. Gary Bettman is allowed to define the parameters for NHL dominance, like it or not, and I think he just did. Maybe three titles in six years is a dynasty in a “salary cap world.”

The NFL exists in a “salary cap world,” albeit a very different one structurally. If you believe the New England Patriots are in the middle of a dynasty, then you should consider that the Patriots have appeared in three Super Bowls in the last eight years, winning only one (the last one).

The NBA exists in a “salary cap world” — also different from the NHL’s and NBA’s, but it’s no less of a cap than either league. If you believe the San Antonio Spurs are in the middle of a dynasty, you should know the Spurs have also made three Finals appearances the last eight years, winning only two. You’d have to reach back 10 years to encompass the Spurs’ last three championships.

The Blackhawks have won three titles in six years. In a salary cap world, that’s as good as it gets.

The San Francisco Giants have won three of the last five World Series, and if you’re going to argue that theirs is more of a dynasty than the Blackhawks’, you’re picking nits. The Giants were downright bad in their off-years (2011 and 2013), negating their specter of dominance, and more importantly do not live in a salary cap world. Major League Baseball is a free-market enterprise with only token restrictions compared to the NHL’s. It’s a different matrix with a different architect.

If architect Bettman declares the Blackhawks a dynasty, so shall it be.

On a semi-related note, SportsLogos.net compiled this fantastic graphic of every Stanley Cup champion in the NHL era dating to 1918: 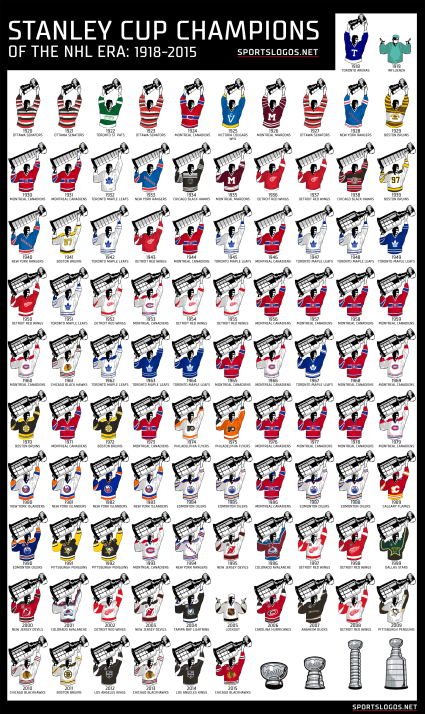 Click on the hyperlink for the full-sized image. It reveals an important lesson: No team since 1967 — you might even argue ’64, depending on your eye for Maple Leafs aesthetics — has dramatically altered its logo/jersey/color scheme between Cup victories. The Pittsburgh Penguins underwent a dramatic sweater shift after winning it all in 1992. When they changed their look again before winning the Cup in 2009, the sweaters looked a lot like they did when Mario Lemieux hoisted his last Cup.

The lesson: Look at your team’s logo the last time it won a Cup. If the logo has changed since then, you’d better hope the team changes back. If it hasn’t changed, your club has a fighting chance next year.