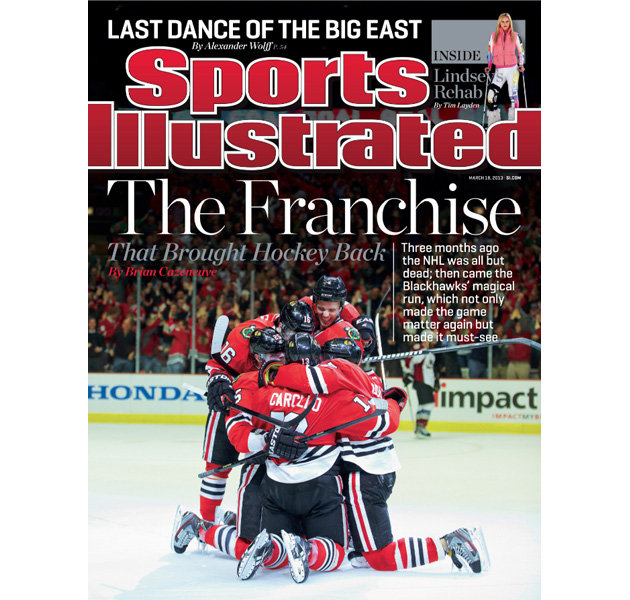 Since the lockout ended, I hoped for an intriguing storyline that would draw casual fans back into hockey. The Chicago Blackhawks were it.

Their 24-game regulation winning streak captured the attention of the nation and even got athletes in other sports, as well as ESPN and Sports Illustrated (above), to take notice. Miami Heat star LeBron James praised the Blackhawks and wished them luck. Even though the Worldwide Leader’s Stephen A. Smith came off like a complete imbecile when asked about Chicago’s streak — it wasn’t hard for him to do — this still gave even more exposure to the game.

The streak came to an end a few days ago but the NHL remains intriguing. Playoff races will begin soon. There’s still time for teams to turn things around, but some need to do so sooner than later. The defending Southeast champion Florida Panthers are in last place with only seven wins, the Flyers have fallen behind the hapless Islanders in the Atlantic, and teams with well-known stars like Washington and Tampa Bay can’t seem to get anything going. Most NHL teams still lie somewhere on the bubble of playoff contention.

As far as which teams can compete with the high-powered Blackhawks, there’s only a handful. The always-consistent Penguins are at the top. The resurgent Ducks, led by Ryan Getzlaf and Bobby Ryan, are close behind. The defending champion Kings seemed to have figured things out and Boston and Montreal are fighting for the Northeast lead. Finally, Minnesota, stacked with last year’s two best free agents in Zach Parise and Ryan Suter, are giving the best team in the Northwest the past two years, Vancouver, a run for its money.

They aren’t a cup contender yet, but the Winnipeg Jets are slowly making noise. After just missing the playoffs last season, the Jets are right behind defending Eastern Conference champ New Jersey for the final spot. The Jets don’t have a lot of star power, but they recently tried to raise their national profile by making a bid to have the Heritage Classic (the Winter Classic’s Canadian equivalent) in 2016. Winnipeg is a year or two away from being a top playoff team, and if they can nail down a premier event like the HC, their stock in the league will continue to rise after languishing for more than a decade in Atlanta.

While the NHL gets prepares for the home stretch, college hockey is hitting the postseason. First round playoff action begins this weekend, while tournaments like the WCHA Final Five start the week after.

Let’s start with the smallest conference, Atlantic Hockey. Niagara sits as the top seed and is the front runner to make the NCAA tournament. Air Force and Holy Cross are the two teams that could possibly upset Niagara, but odds are the Purple Eagles will be the representative.

The next conference is the ECAC. Long considered the Easy AC by the three large conferences, the ECAC boasts the top-ranked team in the country in Quinnipiac. The Bobcats are a lock for the tourney even if they don’t win the ECAC tourney, but some other teams could join them. The Rensselaer Polytechnic Institute (RPI) and Yale would also make the tournament if it ended today, but a good showing in the tournament could ensure it. Last year’s Frozen Four participant Union also has an outside chance, but will probably need to win it all to make it in.

Now let’s move to the CCHA, where a streak will finally come to an end. The Michigan Wolverines have made the NCAA tournament every year since 1991, but that will probably come to an end this year. Michigan is having a bad season and will need to win it all in Detroit to keep their record streak alive. Teams that have clinched berths are Miami and Western Michigan. Notre Dame will probably clinch, but if they can win it or at least make it to Detroit, they will ensure their spot. Everybody else, including National Championship participant Ferris State, will have to win out to make it.

Hockey East always has a competitive tournament and it’s a toss-up this year. No team is standing above the others. UMass-Lowell is in and defending national champion Boston College also appears to be. Things are cloudier for Boston University, New Hampshire and Providence, but a good run could help their cause.

Finally there’s the WCHA, which is stacked from top to bottom. The conference championship was up for grabs until last weekend; who will get the automatic bid is anyone’s guess. Teams like Minnesota, North Dakota and St. Cloud State probably don’t need to fret as long as they don’t get upset this weekend. Minnesota State should also make it in due to their high Pairwise Ranking, and a trip to St. Paul should clinch it. Denver and Wisconsin will need a strong performance (win it or make the title game) to get in.

I try to stay unbiased as a writer, but after hearing the news today, I’m hoping Boston University is able to sneak into the tournament. Head coach Jack Parker has been at the helm for 40 years and will retire at the end of the season. Parker is a Terriers icon with three national championships, 13 Frozen Four appearances, 11 conference tournaments and 11 regular season titles. He is also third on the all-time wins list, thrice the Coach of the Year, and the rink at Agganis Arena is named after him.

However, things have gotten rocky recently for Parker. Two of his players were charged with sexual assault this season and were dismissed from the team. One of them, Corey Trivino, pleaded guilty while the charges against Max Nicastro were dropped.

A task force was created as a result of those charges. It concluded that there was a “celebrity culture” around the hockey team. Parker was then forced to drop his executive athletic director position and forced to dismiss (senior?) Alexx Privitera for “on-ice discipline problems.”

Celebrity culture has an unfortunate tendency to exist at schools where one sport is more popular than the rest. The rape charges were serious, inexcusable and needed to be dealt with. Parker did so. He also started to be tougher in other discipline matters and remained a strong leader of the team. Now that the Terriers have made changes to fix their growing off-ice problems, it would be good for the university and for college hockey to see Parker go out on a high note.