Bruins fans get nasty, and thoughts on the second round 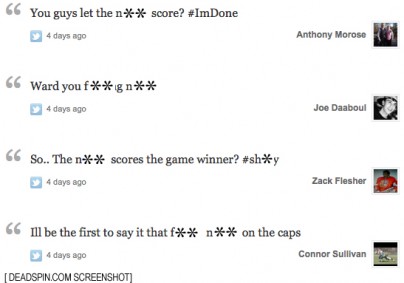 The “N” word is a very powerful word. It creates a lot of hurt and brings our society down as a whole every time it is used.

I thought perhaps that our society passed the point of using this type of offensive language. Guess I was a little naïve.

A few days ago, I was looking forward to watching an intense Game 7 between the Capitals and the Bruins. I even insisted that some of my friends tune in because there really isn’t anything like a Game 7 in the Stanley Cup playoffs.

The game was predictably intense and the Caps ended up pulling out the victory in overtime when Joel Ward stuffed a rebound past a sprawling Tim Thomas. Even though my prediction for the series was wrong, I was happy as a hockey fan that it was more entertaining than I thought it would be.

Intense as the game was, it was nothing compared to what happened on Twitter shortly thereafter. Apparently, some enraged Bruins fans (some were just racists in general) took their anger over their teams losing in the first round to the social media platform and it wasn’t pretty.

I can understand being upset when your team loses in the first round of the playoffs, especially when they are the defending champs and they lost to a team that they probably should have been able to handle. However, these fans didn’t seem to be upset that their team lost, but more so by the fact that it was a black man who scored the winning goal to beat them.

If you can stomach it, check out Deadspin.com, which compiled a list of some of the offensive comments Bruins fans tweeted. They range from “You let the N***er score?” to “Of all the people to score, it had to be the n***er” to “Stupid n***er, go play basketball. Hockey is a white sport.”

Some are even worse than that but I can’t bring myself to include them. As disturbing as those comments were, perhaps what is even more disturbing is the fact that almost all of the people who typed them immediately deleted their accounts after dealing with well-deserved backlash. If you want to say something that ignorant and controversial, then at least stand behind it and let everyone know that you are a racist instead of running away and being a coward.

A few of my friends tried to lump all Bruins fans in with these knuckleheads due to the city’s long history of bad feelings toward blacks, but that’s wrong. Many Boston fans condemned the hate-filled tweets and you should never assume everybody in a city or group thinks the same way as one idiot.

Things have died down since the incident and a lot of that is due to how Ward handled the situation himself. He said he wasn’t letting people’s hateful words bother him, that he wasn’t going to hate Boston in return, and yesterday he thanked people for their support on Twitter and told them that he was remembering what Jackie Robinson went through and focusing on the next series against the Rangers.

NHL players, coaches, and executives have always been mostly white and this will probably be the case for quite a while. But the sport is growing among minorities every year, which is great. Hockey is adapting with the times and hopefully its fans will too.

Now let’s look at the second round. I went six-for-eight with my predictions, losing only with Boston and Chicago. Here’s my next set of predictions.

If you love games with a lot of goals, you won’t find them in this series. Both teams are backed with great goaltenders in Jonathan Quick and Brian Elliott — the Blues actually have two if Jaroslav Halak is allowed to play again — and neither shows any signs of slowing down. Whoever is going to move on will be the team that can score consistently. One or two goals may be all they need.

The Kings have more superstars with Anze Kopitar, Jeff Carter and Simon Gagne, but I just have a feeling about the Blues this year. Blues in 7.

This is another series where the focus will be on the netminders. The Predators have a Vezina finalist in Pekka Rinne (also one of the coolest names in the game) and the Coyotes counter with Mike Smith, who handled the Blackhawks easily in the first round.

Don’t expect a lot of goals, but expect more than the Kings and Blues will score. Smith can have his off-games and Rinne, as good as he is, can get rattled if you score on him early. I think after their solid regular seasons, David Legwand and Martin Erat will lead the Predators into the second round. Predators in 6.

As opposed to the two series in the West, offense might show up here. Henrik Lundqvist gives the Rangers a great goaltender to compete with the others in the playoffs, but he had problems handling the eighth-seeded Senators in the first round. Washington counters with unproven rookie Braden Holtby, who surprised many by getting the Caps past the first round. He played only six games during the regular season and still has some kinks to work out.

Offensively, both teams have stars — Alexander Ovechkin, Alexander Semin and Nicklas Backstrom for the Caps, Marian Gaborik, Ryan Callahan and Brad Richards for the Rangers. They are both equally matched, but I think the Broadway Blueshirts move on as Lundqvist does just enough to outduel Holtby. Rangers in 6.

If you want a lot of goals, here’s where you’ll find them. Both teams are riding shaky goaltenders and have the potential to explode at any moment.

Martin Brodeur is arguably the best goaltender of all-time. However, he’s not the same goalie he once was and needed seven games to get past the Florida Panthers. Ilya Bryzgalov is typically among the best in the league, but he’s had an up-and-down season and looked very shaky against the Penguins.

Offensively, the Devils have a glut of goal scorers like Ilya Kovalchuk, Zach Parise and Patrik Elias. The Flyers aren’t too shabby either with the likes of Claude Giroux, Scott Hartnell and Jaromir Jagr. This will probably be the most entertaining series and will go down to the wire, but Philly will find a way to move on. Flyers in 7.