I recently received an email asking if I would review the forthcoming book “The Championship Formula: How To Transform Your Team Into a Dynasty” by Dr. Jack Stark. 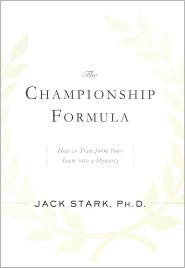 The pitch: “The difference between winning and losing can be less than 1%. It’s almost always less than 5%.”

At first I figured maybe Dr. Stark can explain what separated the Bruins and Canucks in Game 7 of the Stanley Cup Finals, or what separated the U.S. and Canada in the Olympic gold-medal game in Vancouver. (And maybe the answer to both won’t be Roberto Luongo.)

I’m still not sure if I have the answer to those questions after reading “The Championship Formula,” born out of a lifetime’s worth of material from Dr. Stark, a famous sports psychologist who counts Anaheim Ducks goalie Dan Ellis and Minnesota Wild defenseman Greg Zanon among his clients. So I put this question, as well as a few others, in general terms to Dr. Stark in a telephone interview — see his answers below.

More impressive than the specific applicability of Dr. Stark’s formula (P1+P2+P3+P4=Dynasty) is its broad applicability. The “4 P’s” (people, personality, process, purpose) transfer smoothly from college football to NASCAR to boxing to investment-management firms to Ancient Greece to … you name it. If leadership is required, The Championship Formula applies.

To Dr. Stark, that 1- to 5-percent difference lies in leadership. In his view, sports dynasties start at the top with an owner and only much, much later wind up in the hands of a Bill Barilko, a Marty McSorley, a Butch Goring — the actual athletes whose brief moments of glory are credited with extending a dynasty. The emphasis on leadership lends itself to a fresh take on some legacies that have already been written. For example, Dr. Stark curiously but successfully characterizes Muhammad Ali as a “promoter.”

So “The Championship Forumla” isn’t necessarily a hockey book. But it explains the framework necessary for building the NHL’s dynasty teams – the Montreal Canadiens, New York Islanders, Edmonton Oilers, Detroit Red Wings, et. al – and the reasons why certain franchises always fall short. If you’re a hockey fan with a corporate ladder sitting in the backyard of your professional life, you’ll find the book applies twofold.

And if you’re like me, you’ll walk away feeling prepared and inspired to take over a Fortune 500 company. (After all, there are 500 of them and that seems like a lot for one man to choose from.)

AllPuck.com: To what extent did you set out to write a how-to book for someone looking to build a sports dynasty, or climbing the corporate ladder?

Stark: Yeah, because I’ve been a part of 15 national championship teams and I’ve been able to apply it to college sports teams – Nebraska football, NASCAR, other places – even corporate places. You change the culture, build it up and everything takes off. Measuring a championship is clear with sports teams. With championship companies, you see a tremendous surge in profits, stocks, the success of the company. They become dominant in their area.

AP: Reading into your thesis, I came away with the impression that building a dynasty starts at the top and almost ends at the top, too.

Stark: It definitely starts at the top, and at the bottom you’ve got to have people with core principles, what I call a purpose in life. You’ve got to follow the right processes and have the right personality traits. It’s been amazing for me when I laid the model across these couple thousand years, with different teams and different dynasties, you can identify each of these people and their roles.

AP: Let’s say it comes down to Game 7 of the Stanley Cup Finals, which it did last season. Does the “Winning Formula” come into play even in a close championship game or series?

Stark: Yeah, absolutely. I’ve worked with a top Division I program in Nebraska. I was the team psychologist for their hockey team for 15 years. It comes down to it almost every time. I talk about ‘one player, one play, every game.’ One shift, one shot can define not only the game but the career. Beyond sports, you can have one bad bond trader, he’ll cost you billions of dollars. A CEO can lose his job. It’s true with the Stanley Cup, Super Bowl, whatever.

AP: But no dynasty is perfect. As you showed with the Nebraska football team, success is measured over time and not necessarily in the moment.

Stark: Absolutely. There’s going to be a few mistakes. You have approximately 150 plays a game – offense, defense, special teams – somewhere in there. You play 13, 14 games in a season. In 1993 we lost the national championship game on a fingertip. We kicked a field goal, the Florida State DB got a fingertip on it and the ball went wide.

AP: Is it possible that we’ll see another dynasty like the Canadiens in hockey or like Nebraska in college football?

Stark: It’s going to be more difficult, because the competition’s gotten so hard. The sanctioning bodies out there want competition. They want it to be close. You have salary caps in pros. Scholarship limits in college. Technical inspections [in NASCAR]. You try to make it so close that anybody can win any year. They want to keep it interesting, keep it close. Same in business — look at Apple, they lose their promoter and they’re good for three or four years, then you wonder.

Stark: I don’t know if there’s an ideal age. Different kids are more mature. Hockey kids, they grow up at 19, 20. [The players] are older in college, but [junior hockey players] have lived somewhere else since they were 14. Take someone from the city, he hasn’t had as much experience at 22 or 23. They’re not as mature. A lot of times emotional issues don’t become manifested into their mid-20s. Forty percent of college kids have some kind of psychological issue. Pros know their athletic ability, so you’re looking for the intangibles. A lot is riding on it.

AP: There are a handful of 18- and 19-year-olds in the NHL now, a number that seems to grow every year. As a psychologist, does it worry you to see that?

Stark: Yeah. What happens is, I think particularly with the Canadian kids, their system is to bypass college and go right to the pros. It’s a problem. I know a lot of pro baseball teams are hiring psychologists like crazy. The Yankees have like 10 psychologists in their system. They’re not all with the Yankees, but it’s for the farm clubs, Latin America, the Dominican Republic. The biggest problem we see – not just in America, but all over the world – you’re seeing mental health problems everywhere. Twenty-five percent in America, 36 percent in Europe. It’s growing like crazy. What takes kids out is their mental ability, emotional ability … depression, anxiety, drug, alcohol and relationship issues.

AP: Is the increase in mental health issues because of better diagnosing techniques, over-diagnosis, or are these problems really that prevalent?

Stark: I think we’re getting better at diagnosing, but I think [the issues] are getting worse because the impact of families isn’t there any more. There’s not the stability it used to be. Kids are coming in with more issues. The problem too is not a lot of your “sports psychologists” have the clinical background training. It’s not visualizations. It’s, ‘how do I get along with my wife, girlfriend, others?’ ‘How do I deal with drugs and alcohol?’

AP: Do those problems exist in hockey?

Stark: Certainly in hockey it’s a drinking thing. Baseball and hockey [players] tend to have drinking problems. With football, you see more drug problems. … With younger kids, still some marijuana use.

AP: From a psychological standpoint, how are goalies unique?

Stark: They’re unique in that they are a passive recipient. The other guys can attack, shoot, they’ve got to defend. A goalie is always in the defense mode. The other difference is they have to have a short memory. You have to be very even-tempered. If you’re a defenseman, you can hit somebody. An attacker can skate it off. The goalie has to wait there. You can go out there and play lights out and your goalie lets one or two soft ones in, everyone’s down on you. You’re the goat.

I’ve worked with a number of them, including Dan Ellis. They’re very unique, very tough, very independent compared to others. … The best ones are very solid, mature, and they have to have control over their mind. You can’t be too high, too low, but skate in that peak performance zone.