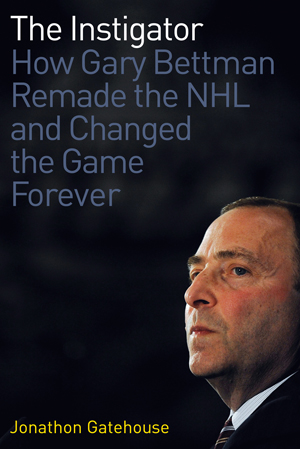 There is a familiar saying about “instigators” in hockey — you love ‘em when they’re on your side, you hate ‘em when they’re not. NHL commissioner Gary Bettman, Matt Cooke, Raffi Torres and Chris Simon have so much in common, it’s ironic that they run afoul of each other so often.

That’s because Bettman is the game’s ultimate instigator. He routinely issues proud proclamations to packed Stanley Cup stadiums while fans douse his words with boos and whatever projectiles they can grab. He says one thing to the public and another behind closed doors. He says nothing about the Atlanta Thrashers or Winnipeg Jets, while secretly ensuring the Atlanta Thrashers cease to exist and become the Winnipeg Jets. And he doesn’t care what you think about any of this.

For 20 years, hockey people have tried to pin down Gary Bettman with a single word – villainous, American, opportunistic, short, smart, lawyer, Jewish. Author Jonathon Gatehouse may have come the closest in “The Instigator: How Gary Bettman Remade the NHL and Changed the Game Forever.” ($24.95, Triumph Books) Researched to the Gladwellian hilt1 and fair to a fault, “The Instigator” is less about Bettman the person and more about Bettman the commissioner — tapping into the perspective of NHL history, the history of commissioners, the psyche of (mostly Canadian) fans who want to beat the guy up and that of (mostly American) fans who don’t give a damn about hockey.

Here’s one personal nugget I bet you didn’t know about Gary Bettman: He wrote his college thesis about how mafia dons structure their criminal enterprises. It was as if, from an early age, he was fascinated with the concept of controlling a vast empire while simultaneously absorbing scorn from his own dependents. Yet if you’ve seen (or read) The Godfather, you know that being a mafia boss demands more than mere instigating.

Bettman’s tenure has seen him play a master administrator, a faceless taskmaster and a willing lightning rod. He doesn’t make being hated look as cool as Vito Corleone, but he sure can make it look easy at times. Just last week, an angry fan demanded a face-to-face interview with Bettman during a news conference outside the negotiating building. Bettman ultimately granted the request, ending things by wishing the guy a happy Thanksgiving.

There’s something admirable to all of those qualities, and even Matt Cooke scores the occasionally pretty goal. Where Bettman really earns his stripes as an instigator is when he’s playing the unapologetic mouthpiece for his constituents, the 29 NHL owners who are among the richest of the one percent. Gatehouse reveals Bettman to be a grown-up version of the brilliant nerd from high school who’s painfully awkward around the cool kids. In Chapter 1, we’re introduced to the NHL’s chief administrator acting completely out of place in a Vancouver-area sports bar showing NHL highlights. No, Bettman is paid, and paid well — around $8 million in fiscal 2011 alone — to put the über-rich at ease about their massive investment in his league. This has been his job from Day 1, when Bettman inherited a group of owners who operated the NHL like a small business with minimal interference from predecessor John Ziegler. The transformation of the NHL’s inner workings has been remarkable, and Bettman is the all-powerful Don.

Within this portrayal, the differences emerge between Bettman and his elite group of contemporaries:

1. Bud Selig, an old-school, “good of the game” traditionalist who, unlike Bettman, didn’t have to read up on his league’s history when he took the job — he’d already written a good chunk of it. Selig cares infinitely about his perception and legacy. If Bettman cares at all, he hid it from Gatehouse pretty well.

2. Roger Goodell, groomed for years under his predecessor, who like Bettman quickly came into his own navigating through labor issues. Possessing the looks of a retired quarterback, Goodell seems to alternate his focus between principle and perception, but isn’t the willing lightning rod for criticism that Bettman has become.

3. David Stern may appear even more bookish and less confrontational than Bettman. Behind closed doors, Gatehouse portrays this to be the opposite. Yet their similarities outweigh their differences. Since Bettman honed his craft under Stern in the 1980s, the two are cut from the same mold. History required both to rewrite their league’s business code when they took the job. For that reason, Stern and Bettman probably feel less motivated to connect their legacy to that of their predecessors, like Goodell and Selig.

So is Bettman’s version of The Commissioner best?

Maybe. But time and again, as Gatehouse peeks through Bettman’s veil of secrecy, the NHL seems to be at least one check and balance shy of sharing power equitably between the owners, the players, the fans, and all those who are dependent on the league for their livelihood. A few examples stand out.

Exhibit A is Bettman’s “quiet boycott” of Hockey Night in Canada since he got testy in a 2010 interview with Ron MacLean. Last year MacLean penned a memoir, “Cornered,” which seems to have worsened the relationship between CBC and the NHL. Writes Gatehouse:

Hockey Night in Canada’s access to other senior NHL figures, like discipline czar Brendan Shanahan, has been totally shut down. “The pressure on me to back off, toe the company line and be the good marketing arm of the NHL is incredible,” [MacLean] says. “The way it gets presented to me is that ‘Gary wants to hear you say that the new NHL is fantastic, and he’s upset that you won’t do that.”

Maybe this is no different from any contemporary relationship between a league and its television partner. Still, CBC/NHL is more steeped in tradition and affection than, say, Fox/NFL. Without interviews from solid first-hand league sources, the network will probably continue to fall back on the opinions of folks like (sigh) Don Cherry. Bettman, like the mafia, will never list transparency among his strong suits – the extreme code of silence from the owners’ side of the lockout is further proof. But he seems to consider MacLean’s open-ended line of questioning akin to a live, on-air confrontation between Bill O’Reilly and Barack Obama. Put Peter Puck back in your death pool.

Exhibit B is the Coyotes. Why are they still in Glendale, Arizona? The answer to that question proves that what is good for the owners isn’t always in the best interests of the game. Gatehouse summarizes it this way:

Despite the league’s lengthy search for a buyer, and Phoenix’s continued financial woes, there weren’t any public complaints from the folks writing the cheques — the other twenty-nine franchises. And that, perhaps, is the truest measure of Bettman’s power and the savvy way he wields it. In triumphing in what came down to a titanic clash of egos, the NHL commissioner still managed to satisfy the people who matter. For those owners in rich markets, the court’s decision to uphold the NHL’s entry rules means they don’t have to live in fear of carpetbaggers. And for those stuck in poorer climes, it preserves an expansion payday that will surely be worth more than $10 million a team. Not only that, the drag the Coyotes put on the league’s bottom line has helped to slow the growth of player salaries. And most importantly, the actual cost to the league and owners to keep hockey in Phoenix has been minimal. … Glendale agreed to cover up to $25 million a year of the franchise’s losses until a buyer could be found. Tack on the revenue sharing that flows to the team—almost $20 million a season that is partially funded from players’ escrow accounts—and the red ink starts to look almost black.

In short, Glendale taxpayers (whose civic employees now must take additional days off to help save money) are paying $25 million, and the players themselves are sacrificing some of their salary, to bankroll the Coyotes and keep player salaries low across the league. It’s a genius scheme. The cost to the league: Maybe few million out of the coffers and some garishly small crowds in Glendale. What’s the big deal here again?

Exhibit C is the league’s timid stance on concussions, which the book barely touches on. In times of labor peace, it’s the most serious problem facing the NHL. For a thorough primer, I suggest reading “Fighting the Good Fight” by Adam Proteau.

One more thing about Mafia dons: They don’t simply retire. Gatehouse doesn’t write a happy ending or a sad ending — after all, the book went to print when the lockout was still stuck on “impending” — but offers us this quote from chief consigliere Bill Daly:

The commissioner, [Daly] says, shows no sign, or even thought, of disengaging. “I think he’s excited every day by the difficulties that are presented by operating this league,” he says. “And he’s never backed off from a challenge. I mean, that’s what he lives for.”

With the NHL averaging one work stoppage every six years under Bettman’s tenure, the thought of another decade or two under the 60-year-old commissioner will only invoke more anger. But the commissioner, Cooke, Simon, Torres and Michael Corleone all know that pissing people off is simply part of the job.

1. I think Malcolm Gladwell would have been proud when Gatehouse dropped, on page 312, the following factoid: “McGwire’s biceps measured twenty-one inches around, compared to the average man’s thirteen inches.” (It had me searching for a tape measure.) Gatehouse was segueing into a summary of Donald Fehr’s record as MLBPA Executive Director: “Sometimes you can do your job a little too well.”