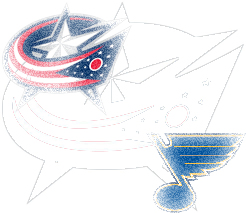 Last Saturday, I attended my first NHL game in two years, which is considered sacrilegious in my family. I went on a road trip with my fiancée up to see the NHL-leading St. Louis Blues take on the NHL’s worst team, the Columbus Blue, Jackets to analyze the disparity between the two teams and it was evident before the puck even dropped.

You’re probably thinking ‘Ryan, you already wrote a column talking about the Blues and their rise to the top.’ (True.) You’re also probably thinking, ‘Ryan you already wrote a column about how bad the Blue Jackets are and how they are trying to appease season ticket holders with hot chocolate.’ (Also true.) This might seem redundant, but it’s hard to gauge just how good or how bad teams are until you see them up close, so I thought I’d see how far off I was in my original assessments.

Turns out I wasn’t that far off.

If you haven’t been to the Scottrade Center, go. The place can get really loud — especially during a power play. Fans here also actually know the players well and understand the game, a rarity in some NHL arenas. (Although I do have to wonder if some of the people who bought Alex Pietrangelo and Carlo Colaiacovo sweaters did so because they liked their style of play, or because their names sound cool.)

The Blues seemed to radiate confidence coming out of the tunnel. They had the NHL’s GAA leader, Brian Elliott, guarding the pipes. The guy with the next-best GAA in the league, Jaroslav Halak, was on the bench. St. Louis also boasts a very balanced offense – three players with more than 40 points and seven with more than 30. Elliott looked sharp in warm-ups and his teammates looked ready to clear the ice with Columbus.

By contrast, the Blue Jackets came out weary, offering no hint they were on a four-game winning streak. They missed wide on a lot of their warm-up shots and it seemed as if Rick Nash really didn’t want to be there. I seriously wonder if he dies a little inside looking at the supporting cast management has given him this season.

Just two minutes into the game, things got a little heated. Former North Dakota captain Chris Porter, never a fighter during his college days, crushed a Columbus player with a nice hit near the blue line and proceeded to pound the tar out of Columbus’ Darryl Boyce. This was the first of two fights, and many more scrums. From my seat, it seemed as if the Jackets were the instigators in most of the scuffles and the only reason I can think they had for doing so was to “go down swinging” in an awful season.

David Perron notched the first goal of the night, tapping in a rebound past a sprawling Curtis Sanford. The Blues continued to pepper Sanford with shots the whole period and, when all was said and done at the end of the first, St. Louis held a 15-6 shot advantage. Some big glove saves by Sanford were the only thing keeping Columbus in the game.

Through the first 20 minutes, St. Louis had more shots, hits, offensive opportunities, and could fight better. The rest of the game didn’t look good for the Jackets.

I’m not sure what Columbus interim coach (and Minnesota Wild reject) Todd Richards said in the locker room, but the Jackets showed signs of life in the second period. They came out blazing with some shots on Elliot that actually required some effort to stop – unlike the first period. Their best opportunity when T.J. Oshie was whistled for a blatant high stick. Columbus kept the puck in the Blues’ zone the entire power play and just after the penalty expired, Cam Atkinson tied the game with his second goal of the season, beating Elliot five-hole.

That proved to be Columbus’ last hurrah, a fleeting moment of glory that quickly turned into ineptitude. Soon after Atkinson’s goal, Chris Stewart went coast-to-coast, sliding past Brett Lebda and beating Sanford top-shelf with a backhand. Sanford had no shot of stopping the shot, but it made me wonder if Stewart could pull off the same move in the playoffs, against a more defensively sound team.

Late in the second, Oshie put the Blues up by two on the power play, firing the puck past Sanford while falling to one knee. You could see the frustration get to the goalie, who was standing on his head trying to keep Columbus in the game. Dumb penalties and terrible defense were all he got in return.

Just like other sporting venues, the Scottrade Center offers Blues fans a deal if a task is met by the team. If St. Louis scores four goals, each fan gets a free Big Mac from McDonald’s1. With fans clamoring for free burgers – they actually were urged to start chanting “We want Big Macs” during the final frame – the Blues didn’t disappoint. Pietrangelo scored the final goal of the evening on a tap-in with the man-advantage and helped the Blues tie a team-record for home victories in a season with 29.

While the three stars were announced (which I think each home team rigs after every game), I had to marvel at how each team was going in opposite directions. St. Louis had been building for this moment for a long time. They have a great group of talented young players, amazing goaltending, and a solid leader on the bench in head coach Ken Hitchcock. Columbus seems to be getting progressively worse. They just sold their second-best player in Jeff Carter, their best player (Nash) has requested a trade, they have no future number-one goaltender despite Sanford’s best efforts, and a coach in Richards who will most likely be replaced at the end of the season.

As I walked out of Scottrade, I saw joyful Blues fans screaming, whistling, and starting chants in the hallways and I was happy for them. They’ve been waiting a long time for a team like this.

Lost in the crowd, a Columbus fan wearing a Nash jersey walked with his shoulders slumped and his hat covering his eyes, shaking his head from side to side.

Who knows when he’ll ever be that happy?

1. Kudos to ownership for giving fans an achievable deal. I’m used to impossible offers in Minnesota. In the early 1990’s, the NBA’s Timberwolves used to have a deal where every fan would win a free taco from Taco Bell if the team scored 100 points and won the game. If you can’t remember how awful the Wolves were back then, I think that deal was completed maybe five times in the team’s history before they took it off the board.