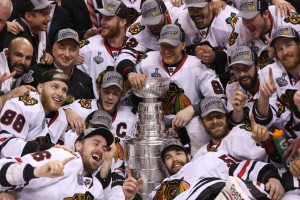 It’s rare that you see a team come charging out of the gates at the start of the season and still have enough in the tank to hoist Lord Stanley’s Cup in June, but that’s what the Chicago Blackhawks accomplished Thursday night. Chicago became the first team, since Detroit in 2008, to win the President’s Trophy and the Cup.

The 2012-13 season was supposed to get under way in October, but due to some constant bickering by the owners and Commissioner Gary Bettman’s inability to do anything constructive, the players were locked out in 2012. It wasn’t until the season was on the brink of being canceled that everyone woke up and realized that this would be a massive PR disaster. The NHL lost an entire season in 2004-05 and it required some new rule changes (i.e. shootouts) to get fans to trust them again. If that happened for the second time in less than a decade, some were thinking the league might never recover. Thankfully though, everything got worked out and a 48-game schedule was salvaged.

When the season eventually began in mid-January, there was a lot of speculation on who would be the team to beat. It didn’t take long to figure it out as the Blackhawks started to pile up wins. As the season wore on, the wins kept coming and even non-hockey fans were starting to take notice. ESPN, who seems to avoid hockey like the plague, even turned its focus away from LeBron James and Tim Tebow to give Chicago some press. Even James sent out a tweet professing his respect for the Blackhawks’ streak. Sports Illustrated devoted one of its covers dubbing the ‘Hawks as “The team that saved hockey.” The streak ended at 24 games, but the message was clear. Chicago was the team to fear in the NHL.

After finishing the season with an insane record of 36-7-5, the Blackhawks were paired up with my hometown Minnesota Wild in the first round of the playoffs. Even though the odds were stacked against them, I was hoping my beloved Wild would put up a good fight considering how much money they shelled out in the offseason to make the playoffs. However, that wasn’t meant to be. Chicago rolled past Minnesota in five games and moved on to face Detroit in the second round.

This is where Chicago faced its biggest test. They had the star power with Patrick Kane, Jonathan Toews and Marian Hossa, along with a solid goalie in Corey Crawford, to make it to the Finals again. However, it is what they did against the Red Wings that showed how talented this team really was.

Down three games to one, the Blackhawks roared back with a big win in Game 5 at home, and at Joe Louis Arena in Game 6, they got three unanswered goals from three different players to tie the series. Brent Seabrook then beat Jimmy Howard in overtime in Game 7 to complete the three-game comeback. When the Red Wings surprised most of the hockey world by handling the league’s top seed in the first four games, many started to doubt if the Blackhawks had the ability to bounce back, but by showing its resiliency, Chicago made a big statement. That they were not only supremely talented, but they can handle coming from behind.

Chicago faced the defending champion Kings in the next round, but Los Angeles didn’t put up much of a fight. The Blackhawks only dropped one game, Game 3 at Staples Center, and were able to beat an “unbeatable” goaltender in Jonathan Quick.

All of the previous series prepared Chicago for what Boston was going to give them in the Finals. The series  with the Wild gave them confidence, the series with the Red Wings showed them they could recover from a big deficit, and the series with the Kings told them that they could beat a great goaltender. As a result, they were able to beat the Bruins in two overtime games, including one where they coughed up the lead multiple times.  Chicago also came back from a two games to one deficit and lit up the much-hyped Tuukka Rask for 17 goals after Rask had only given up three to the top-seeded Penguins.

So how did the Blackhawks become the first two-time champion in the new salary cap era? By staying with the same players that brought them a title in 2010. True, Antti Niemi and Dustin Byfuglien were gone, but the stars were still there and Joel Quenneville was still at the helm. Crawford was able to rebound from a rough 2012 campaign and turn into a great postseason goalie, as well as a great replacement for Niemi. The chemistry was also there on the ice as the tying and winning goals in Game 6 of the Finals came due to teamwork and anticipation.

Now that the season is over, the big question now is can Chicago repeat? The short answer is probably not. Nobody has repeated as champs since Detroit earned back-to-back sweeps in 1997 and 1998, and that was with a completely different financial situation. The Kings are still strong in the West, the Sharks seem to finally be able to take that next step, and the Wild seem committed to building a contender. If you look to the East, Boston has shown it has the weapons to win another title, the Penguins will be eager to make up for underachieving in the playoffs, and the Capitals are showing signs of building a deep playoff run next year. That being said, the Blackhawks will be stacked next season as none of their superstars are unrestricted free agents. However, they will probably lose defenseman Bryan Bickell, who is a UFA, and was an important part of their postseason run. If they can find a replacement for Bickell, continue to build their team with talented prospects, and if all the key pieces remain in place barring any serious injuries, a third title in five years is a very real possibility.