‘John Scott, All Star’ has a funny ring to it. Embrace it. 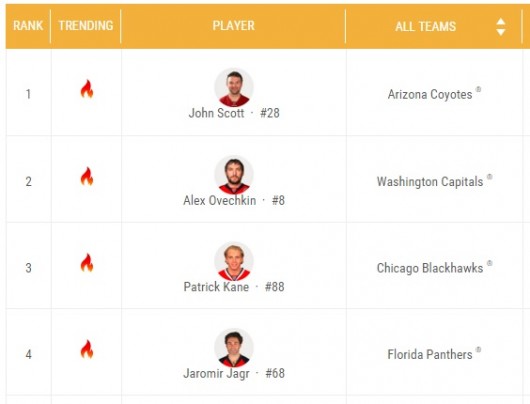 There’s a reason that Danny DeVito is starring in a series of coffee commercials alongside George Clooney these days. Someone once let a 5-foot tall man into Hollywood and we kept laughing, laughing, laughing. First there was Taxi, then Twins, then Batman Returns, then It’s Always Sunny in Philadelphia, to the point where a couple years ago this real-life penguin had enough power and status in town that he was able to sleep around with enough women to force his wife to file for separation rather than passively tolerate his philandering. And, yes, he makes George Clooney seem like the dashing leading man he is when the two sip a cup of Nespresso side-by-side — as if Danny DeVito was needed to propagate that image of Clooney.

In Hollywood, DeVito is somewhere between a talent and a novelty act, not quite enough of one to elude the other label.

So it is with John Scott.

There’s a reason that Scott is the leading vote-getter in the NHL All-Star Game. Someone once let a 6-foot-8 man into the league, ostensibly to protect goal-scorers from enduring the brunt of physical violence. He certainly isn’t being paid $575,000 this season to score. Scott has been allowed to play all of 37 minutes for the Arizona Coyotes and is still waiting for his first goal. When that goal comes, if it comes, it will be the sixth of his NHL career, which began in 2008.

Scott averages six minutes and 19 seconds per game. His earning power breaks down to $15,540 for each minute he’s played this season. Consider that the Coyotes’ leading goal-scorer is Mikkel Boedker, who so far has earned $8,348.17 for each minute he’s played this season. Say what you will about Scott, but whoever signs the Coyotes’ paychecks these days has determined Scott to be a very valuable member of his team — somewhere between a talent and a novelty act.

The lines get blurred when you allow fans to vote for the captain of the four(!) All-Star teams that will play 3-on-3 hockey this January in Nashville. Currently, Scott is leading the vote.1

The logical argument against Scott is this: He’s a fighter, maybe the most feared in the sport, and there is no fighting in the All-Star Game. By the same logic, if the NBA changed its All-Star Game into a free-throw shooting contest, Dwight Howard should be the runaway fan favorite. The NHL All-Star Game is all about scoring. John Tavares scored four goals in last year’s All-Star game. Scott has never scored more than four goals in a season at any level.2

But Scott has his virtues. He’s probably good enough with his fists to be a heavyweight boxer, and one of the last pure enforcers in the league. That makes him a treasure in the same realm of the last NFL drop-kicker, the last knuckleball pitcher in baseball, or Rick Barry, who still shoots underhand free throws in my imagination. By all accounts he’s a good guy off the ice, too.

Scott has asked fans not to vote for him, something only a Canadian hockey player would do.3  That strikes me as violating the spirit of a democracy, which insists that anything can happen.4  It’s probably best to let this play out on its own. If the NHL doesn’t like the idea of John Scott captaining an All-Star team, it can simply do away with fighting altogether. While the idea that men like Scott make the sport safer for his teammates is dubious, so is the idea that eliminating fighting would significantly reduce concussions. The league has wisely let this issue play out on its own, all but eliminating “goon” from the NHL vocabulary with little legislation to encourage it.

If the occasional John Scott or Danny DeVito slips through the cracks in the establishment, so be it. Just enjoy it and remember to laugh.

1. Have you voted? Have you seen the new NHL.com? If this is what MLB Advanced Media can do with something as simple as an All-Star ballot, I’m paying them to file my taxes.
2. His personal season high of four was recorded in 2001-02 for the Chicago Freeze of the North American Hockey League.
3. Baseball players, by contrast, have been known to film TV spots to ask fans to vote them into the All-Star game.
4. Bernie Sanders, person of the year?