All-Star Games are no cure for puckaholism. 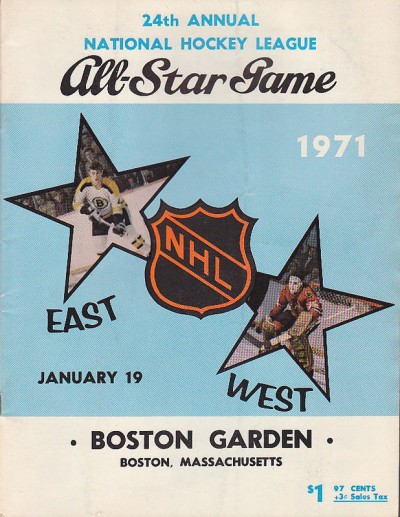 It started during the teenage years. Anticipation coupled with excitement created a roller-coaster effect. Up, up, up, went the emotions.

My first ride was in 1992. All-Star Game? Wayne Gretzky, Brett Hull and Steve Yzerman, together on the same line? Imagine a beautiful tic-tac-toe passing clinic. Imagine a highlight-reel goal against Patrick Roy. What if Mario Lemieux scores 10 points?

… Down, down, down, they came. Because nothing happened.

I created a monster, an anticipation of the best hockey of the year. But all of the stars disappeared, and the extended break from regular season games created full-fledged puckahol withdrawal.

Sweating. Anger. Confusion. Depression. Rage. Destruction of property. Arrests. A visit to a meeting. A visit to a rehabilitation center.

And I couldn’t stop myself. Three or four days of pure insanity. No hockey, all insanity.

Oh, the regular season would come back in three-to-four days and get me back on the wagon. But the days during the All-Star break? Pure torture.

Do you understand? We don’t get hockey during the NHL All-Star break, although the league tricks us into thinking it’s going to be incredible.

It’s like being served a pitcher of beer after a hard day of work. You see it foam. You see the sparkling carbonation inside the plastic mug. It’s saying, “guzzle me.”

Then you take a swig.

So you can only guess what happened to me 11 days ago.

Withdrawal? Epic withdrawal. Think of a scale from Josh Hamilton (mild) to Ozzy Osbourne (heavy), and I shattered the meter. I was Charlie Sheen plus Tom Arnold, shaking like a leaf, incoherent, paranoid, full of rage.

Soon enough, I was standing before a group saying, “Hi. I’m Bruce Mason. And I’m a puckaholic. The suspensions and lack of old-school hockey had me hanging by a thread all year, and then the All-Star break came and …”

But that meeting didn’t work either.

And neither did rehab.

(Sigh…) I write you from a mental institute. It’s Day Eleven. I sit here, amid darkness, staring into the lighted screen on my laptop as I type on the keyboard. No internet. No. That’s not allowed. Just this keyboard. I write, then I pound the steel door, the guard opens the drop box (the mere crack of daylight blinds my eyes, ala Andy Dufresne in “Shawshank Redemption”), then I close this laptop and give him my column. If you’re reading this, it made it to you. (If you’re in Zihuatanejo, you’re screwed.)

Anyway, please don’t be me. If the All-Star Game sent you toward destruction, you need to read these six steps of sobering wisdom for future All-Star weekends.

Save this in your in-box, tape it to your fridge, or both, because this is critical.

Step One: Realize that the skills competition is lame; don’t anticipate goodness.

But that’s about it.

That’s the breakaway contest. Never gonna be the same.

And that’s why there’s massive silliness everywhere. We previously noted that Corey Perry was expelled from the Old School Top 10. Basically, we questioned his manhood. Some people thought we were too harsh.

However, we were proven right, again.

Perry’s stunt during the Skills competition was downright childish, and I mean Pee-Wee Herman childish:

Did you see that? Who pulls something out of their pants in the middle of a shootout? And who harkens back to their toddler days and stick handles with a 3-foot wooden stick?

“This is why the NHL sucks!” another fan lamented.

(OK, that person was me. But you get the point.)

Sadly, the silliness didn’t stop there.

Patrick Kane wasn’t even alive when Superman hit the cinemas in 1978. Heck, in this technological day in age, I bet he doesn’t know it was a comic series! Hey, it was blatantly obvious with his stunt: half Superman, half Clark Kent. Half and half? Yes, half and half. He wore the cape of Superman, the glasses of Clark Kent. And the sick thing is, for reasons I just mentioned, he likely doesn’t know Superman’s alter ego was Clark Kent.

You cannot pose as both. That’s slapping DC comics in the face. Heck, that’s like wearing half Batman, half Robin. Or half Obama, half Bush, if that was humanly possible. You just don’t mix in those situations.

Anyway, getting through this seductive step is the toughest. Typically, it sucks people into a myopic imagination of greatness, and then just sends the emotions tumbling downward.

Get through this step, and it can ease a path the rest of the way.

Step Two: Realize that the game is just a tease.

Player introductions3 are promising. Your favorite star appears in a sparkling jersey, newly stitched. He gives that million-dollar smile. Everything is great.

Then the game starts.

Then he lags across the rink.

Then he sits the bench too much.

“Pass him the puck!”

“Why isn’t he shooting?”

He’ll never produce like you hope. Even Marian Gaborik’s hat trick isn’t enough. You want more. You want Mario Lemieux. You want Wayne Gretzky. Something amazing. Yet it never happens.

And answer this: What use is Dion Phaneuf in an All-Star game without a devastating body check? Did you see how out of place he was last weekend? It was like seeing Madonna in church.

Anyway, there should be contact in this game. Nobody is gonna get seriously injured, and I’m sure guys like Alexander Ovechkin would love to take a run at Evgeni Malkin, and sickos like Scott Hartnell would love to bite Kris Letang again.

Oh, who am I kidding. It will never happen.

And that’s why you should realize it’s just a tease. Always has, always will be.

When elder-statesmen such as Nicklas Lidstrom and Teemu Selanne are skipping out, you know the game is a waste of time.

Step Three: Realize that you’re being used by the NHL.

The NHL uses its All-Star game to earn a paycheck. Plain and simple.

It’s also a defacto social gathering4 for the prime stars of the game. That’s a poor excuse, because they can chat after regular-season games. Or during games. Or when a shootout takes place, they can lean over their side of the bench and debate, “Who’s the bigger fool, Bettman or Shanahan?”

If the NHL really cares about the fans, there would be a Winter Classic three times a year, more Original Six matchups, fewer suspensions, more fighting, smaller goalie pads, and a new commissioner.

But they don’t care. So they give you the All-Star game.

Remember: It’s not for you.

Yes, I went there. Every kid gets excited, so squash their desires and tell them the game sucks before their excitement builds into a crescendo that will surely tailspin and crash into misery.

If you let them watch, they’ll be excited for a few shifts, then the candy-rush subsides and reality strikes, thus planting the first seeds of post-traumatic stress disorder later in life (see above).

There’s nothing more terrifying than seeing a 7-year-old kid walking though a stadium with an All-Star jersey. They’re ruined for life.

First of all, the jersey is worthless once the game is complete. That’s because, a, the NHL will design a new jersey each year in an effort to make cash and, b, There’s no guarantee you’re favorite player printed across the back of the jersey is gonna return. Don’t believe me? Ask Sidney Crosby.

If you’ve come this far, that’s great. Here’s a common, critical mishap that will trigger a relapse: Looking at the box score. It can plant a seed to watch again the ensuing season. You’ll see a high-scoring result, think the game was actually entertaining, and then you’re sucked into coming back.

Look. The best part of being a fan in hockey, or in any sport really, is winning. When your team wins, it rocks. When they lose, it sucks. You feel attached. You feel like you’re a part of something special.

This game is just another way for the fat-bellied executives to boost revenues and justify their salaries.

And why does a multimillionaire MVP get awarded a car, when he already has seven garages full of cars? Great subliminal message to send amid a financial crisis.

Anyway, if the MVP was allowed to punch Gary Bettman in the face, I think the ratings would soar through the roof. Maybe we’re onto something there, but that won’t happen either.

U.S. and Canada cannot be allies on the ice rink. Never gonna happen. If U.S.-born Ryan Kesler plays for the Vancouver Canucks, a Canadian team, and still rips Canadians during the Olympic Games, then they’ll never coexist. Not even in today’s lovey-dovey, politically-correct soft age, it won’t exist. So let’s just forget about it.

And you know Russia will never sit on the same bench as the Czech Republic and Slovakia. That would create the Warsaw Pact all over again. Heck, you saw Alexander Ovechkin give his best Scott Stevens impression in the 2010 Olympics, right? Remember when he turned Jaromir Jagr into a crash-test dummy? How ugly was that? Those guys cannot sit in the same locker room. Not gonna happen.

So there it is. Ottawa hosted this year, and Columbus is the next voyage. No, it’s not the sailor from 1492 who sailed the ocean blue. It’s worse. It’s the town in Ohio (aka, the armpit of the U.S.). Nobody in Ohio cares about hockey unless there’s a spittoon and a ceremonial puck drop performed by the Ohio State Buckeyes. I’m predicting more puckahol-related accidents next year than all other years combined. It won’t be pretty.

You, on the other hand, have hope. You have this message. Print it. Attach it to the fridge. Keep these rules in mind.

2. By the way, can we give Chara a wooden stick for the hardest-shot competition? I’d like to see if it still beats Al Iafrate’s 105.2 mph blast from 1993. I bet he doesn’t. And I actually felt bad for the mesh netting when Chara exceeded 106 mph on four straight attempts. That really makes me wonder about the plexiglass, because if plexiglass can absorb 106 mph, I’m convinced it can absorb a nuclear holocaust. I’m covering myself with plexiglass when Armageddon comes calling.

3. Dammit, why didn’t Dany Heatley make the All-Star game? His entrance into the crowd would’ve been epic. The fans of his ex-team would’ve booed and hissed like he was Public Enemy No. 1. And when he strolled onto the ice, we could’ve played Jason Spezza’s nerdy laugh across the screen.

4. While we’re on the “social” topic: Trying to hear Henrik Lundqvist through his mask was a challenge. Muffled a little? Try mouth-full-of-food muffled. I hope your volume was on 95 out of 100. It’s another fabulous idea by the NBC coverage team. I’m guessing it was Jeremy Roenick’s idea in the production meeting. (Maybe not, but JR cried on NBC when the ‘Hawks won the Cup, so all criticism automatically defaults to him.)