All hail the Kings of Los Angeles. 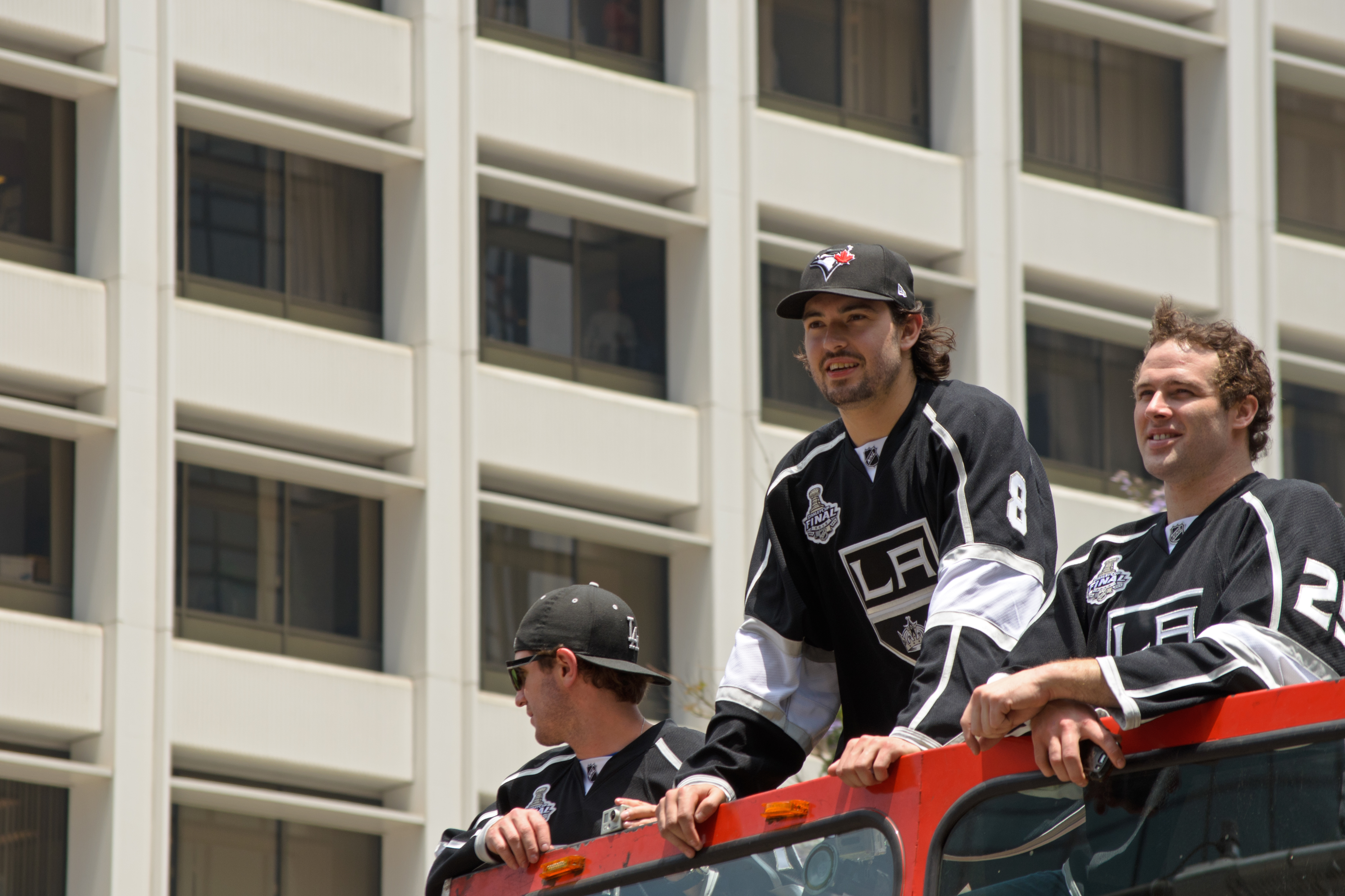 A trend is building in the NHL and it’s a good one. Long-suffering franchises will either win their first title or their first in many decades. It started with the Blackhawks in 2010, continued with the Bruins in 2011 and now, the Kings have finally hoisted the Stanley Cup after 45 years of mostly ineptitude.

Not every hockey season in Los Angeles was a bad one – the Kings reached the Stanley Cup Finals in 1993 and have made the playoffs quite a few times – but many ended at the bottom of the Western Conference. Or in bankruptcy.

That’s what made Monday’s victory so heartwarming. Los Angeles overcame years of disappointment and heartache along with the sheer incompetence of the local media to become Stanley Cup Champions.

The Kings were part of the NHL’s first big expansion in 1967 and were also part of the league’s attempt at moving west along with the California Golden Seals. Yet despite spreading interest in the sport to a new area, they were always the fourth or even fifth-most popular pro team in town behind the Lakers, Dodgers, Rams/Raiders and even the hapless Clippers.

The jerseys were purple and gold in the early days and the crown logo was a little garish. The Kings also didn’t even start off playing in L.A. They were forced to play in Long Beach until the Great Western Forum was built. The Kings started off successful, making the playoffs their first two seasons, but then hit the skids for a few years. Los Angeles started to rebuild around goaltender Rogie Vachon, but it wasn’t until they acquired superstar Marcel Dionne in 1975 that the franchise’s fortunes turned around.

Dionne would lead the Kings back to the playoffs and in 1979 he got a supporting cast. Young winners Dave Taylor and Charlie Simmer helped Dionne form the “Triple Crown Line,” one of the most prolific lines in history. Their first season together, Dionne ended up winning the Art Ross Memorial Trophy with 137 points and 53 goals and the TCL combined for 328 points and 146 goals. However even with a powerful front line, the Kings weren’t able to get past the first round of the playoffs until 1982 when they upset Wayne Gretzky and the Edmonton Oilers.

Dionne stayed with Los Angeles for a few more years before getting dealt to the New York Rangers in 1987. The Kings would continue to make the playoffs after he left, but still were unable to get very far. Things would dramatically improve in 1988 when the Great One came to Hollywood.

New owner Bruce McNall acquired Gretzky from the Oilers in a blockbuster trade that ripped Canada’s heart out and increased hockey’s popularity in California. McNall also changed the team’s colors to silver and black. In Gretzky’s first season with Los Angeles, he won his ninth Hart Memorial Trophy. The following season, he became the NHL’s all-time leading scorer.

In 1990-91, Gretzky would lead the Kings to their first and only division title. One year later, seven players would score 20 goals or more. Unfortunately, Los Angeles couldn’t vanquish Gretzky’s former team, the Oilers, in the playoffs.

Until this season, the best season in Kings history was 1992-93. Los Angeles winger Luc Robitaille won the Calder Memorial Trophy in 1986 as the league’s best rookie and became a great right-hand man for Gretzky who in 1992 was recovering from a herniated disk. The Kings would go on to defeat Calgary, Vancouver and finally Toronto in an awesome seven-game series. Los Angeles would then fall to Montreal in the Stanley Cup final.

After coming so close to the top of the NHL, the Kings quickly plummeted off the edge. It was revealed the team’s owner, McNall, was guilty of obtaining hundreds of millions of dollars in fraudulent loans. Thanks to McNall, Los Angeles fell into bankruptcy. This would eventually lead to the trading of Gretzky to St. Louis and Rob Blake being named team captain. Although Blake would go on to win the Norris Trophy as the NHL’s best defensemen, the Kings would have to rebuild from scratch.

During the rebuilding period, the Kings would move into the Staples Center along with the Lakers and Clippers and would win their first playoff series since 1993 during the 2000-01 season, upsetting the heavily favored Detroit Red Wings.

But the franchise was beset by injuries and a complete cleaning of house that set the team back almost an entire decade.

Winger Anze Kopitar and goaltender Jonathan Quick were drafted in 2005 and Dean Lombardi become president and general manager in 2006. Defensemen Rob Scuderi and Drew Doughty would join the Kings in 2009 with Mike Richards and Simon Gagne coming on board in 2011.

Although many players would contribute to Los Angeles’s first Cup, the two that really stand out are Quick and Kopitar. A prep star in Connecticut, Quick would go on to lead the University of Massachusetts-Amherst to its first ever NCAA Tournament appearance. Quick would shut out Clarkson University in overtime before falling to Maine in the second round. He left school with numerous UMass records.

Quick would be stuck in the minors for a little while before finally becoming a regular member of the Kings in late 2009. After arriving in the NHL, he was soon named to the U.S. National Team for the 2010 Winter Olympics, where he ended up winning a silver medal. Quick had done a solid job in the NHL his first couple of seasons, but he really blossomed this year. He was a Vezina Trophy finalist, led the league in shutouts with 10 (a Kings record) and was second with a GAA of 1.95. He would go on to notch three more shutouts in the playoffs as well as set an NHL record for consecutive road playoff wins (12) en route to the Conn Smythe Trophy.

Kopitar had a little different journey than his teammate. The first Slovenian-born NHL player, Kopitar left his native land for Sweden at the age of 16. It didn’t take long for NHL scouts to notice (he was dubbed the best European skater in the 2005 draft) and the Kings made him the 11th overall pick that year. In his first NHL season, he finished third among rookie scorers with 61 points. Since then, Kopitar has led the Kings in scoring for five straight seasons and set a team record by playing in 330 consecutive games.

Some analysts have said thanks to the great run they put on in this year’s postseason, the Kings should be the favorites to win it again next year. I’m not sure about that yet.

One thing is for certain: With a stable front office and stars like Kopitar and Quick, the Kings are going to be near the top of the NHL for quite some time.