A Stanley Cup winner’s ring is up for auction — with your name on it. 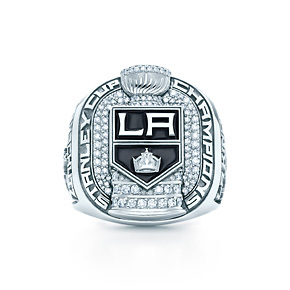 Every now and then you’ll see one: A piece of sports championship memorabilia up for auction from a once-wealthy player hard up for cash. Or, in the case of O.J. Simpson, more than one.

The Los Angeles Kings 2012 Stanley Cup champion’s ring that you see above is up for auction, but this one’s for a good cause.

It’s the genuine article, crafted by Tiffany & Co. and personalized with the winning bidder’s name engraved on the band. This special ring is not for sale anywhere, and is an exact replica of the rings the Kings’ players received for their 2012 Stanley Cup win.

Proceeds from the auctions benefit City Year Los Angeles and Children’s Hospital Los Angeles. Submit your bid here, but be ready to dig deep: As of this writing, the high bid is $14,000.

City Year is an education-focused, nonprofit organization founded in 1988 that partners with public schools and teachers to help keep students in school and on track to succeed. In 24 communities across the United States and through two international affiliates, this innovative public-private partnership brings together teams of young AmeriCorps members who commit to a year of full-time service in schools. Corps members provide individual support to students who need extra care and attention, focusing on attendance, behavior, and course performance through in-class tutoring, mentoring, and after school programs.

Children’s Hospital Los Angeles has been named the best children’s hospital in California and among the best in the nation for clinical excellence with its selection to the prestigious US News & World Report Honor Roll. Children’s Hospital Los Angeles is home to The Saban Research Institute, one of the largest and most productive pediatric research facilities in the United States. The hospital is also one of America’s premier teaching hospitals through its affiliation since 1932 with the Keck School of Medicine of the University of Southern California.