PORTLAND, Maine – Back in the day, Brad Church, coach of the Portland Junior Pirates, had himself a pretty good professional career.

A coupla games in the NHL (with Washington), a lengthy tour of the minors, following which he began his coaching path.

He had enough of a career to have known about feared enforcer Peter Worrell, and known enough not to even think about tangling with him.

Now, in a much different place and time, Church is plenty grateful that hockey games are still settled by play on the ice, not by fist-fights between the each team’s head coach.

“It would be a forfeit,” said Church.

Now Church was tough enough and big enough to answer any bell when that rang.

That would have been another matter.

A towering presence at 6-foot-8 and 250 pounds, Worrell was all muscle and mayhem, and in a-seven year NHL stay with Florida and Colorado, battled his way to a whopping 1,554 minutes in penalties.

Which is what makes the notion of the massive Carribean-Canadian coaching a high school hockey team from South Florida so intriguing. 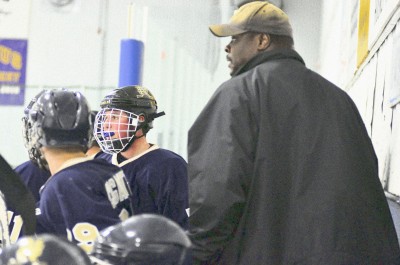 Those enormous hands (below), which when curled into bone hammers pummeled more than 100 tough opponents from 1997-2004, are now given the task of molding young players at North Broward Prep.

And doing it quite well, we might add, as lopsided wins over Bangor and Lewiston, both of them strong Maine high school squads, during a recent Northern showcase tour that also featured a scrimmage with Church’s Jr. Pirates, will bear witness to.

“We have a good, talented program,” said Worrell. “We’re just a little young.”

Young, but focused, too.

It would be next to impossible not to be, when someone like Peter Worrell is leaning on your shoulder.

His young charges, some of whom are old enough to remember him playing, seem to realize what it means to have such a massive (in both stature and reputation) coaching them.

“It’s awesome,” said junior assistant captain Anthony Vizzi, who admitted to having YouTube’d his coach’s old fighting videos. “He’s a great coach. The guy is unbelievable. He played in the NHL, so the guy knows everything. I wouldn’t want anyone else to coach me. In Florida, at least.” 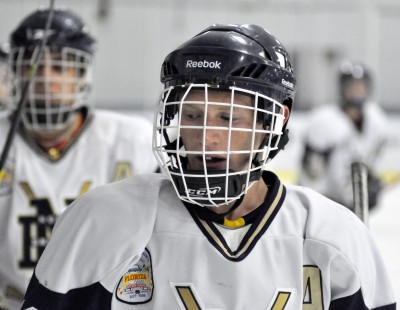 “I’ve learned more in two and a half years under him,” said sophomore forward Fred Kaub (above), “than I ever knew. It’s unbelievable. He experienced what we’re experiencing, right now.”

Well, perhaps without the blows to the head, which during his playing career, Worrell dished out more of than received.

And while he was still lacing his skates and dropping his gloves, Worrell said that going into coaching never entered his mind.

“Absolutely not,” he said. “No. And most guys who played with me (didn’t see) me doing that, either. I was not the most patient guy as a player. I was very high octane and I had to be. Whereas in this job, you can’t be. It took a transition to slow myself down.”

That transition took a few years with North Broward as a volunteer assistant, which eventually led to taking the head job two years ago.

Along the way, Worrell hooked on as bench boss for the club team at nearby Florida Atlantic University. 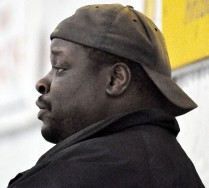 “There are moments when the old me comes through,” Worrell admitted.

Perhaps. But a little referee baiting hardly makes a guy a brawler.

As for bringing his Eagles way up North, Worrell is doing what any good high school hockey coach would do.

Give his kids the chance to learn.

“We’re a new program in terms of what we’re trying to build,” he said. “We look at the New England model of what a prep school program is, and that’s what we want to be. We know we’re not one of the big schools yet, but that’s who we aspire to be.

“To come into this territory gives us a glimpse for our players to see what it’s like. And for some of our players to be seen by some of those (college and junior) programs that have opportunities. We’re wanting to move players to a higher level, and take steps to be seen everywhere.”